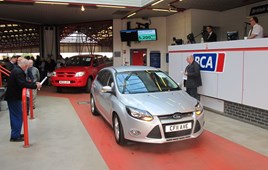 BCA has launched new sales North of the border as it reports strong demand across its Scottish network throughout September.

The remarketing specialist recorded a new sales record in Glasgow when 271 vans sold within a week and Edinburgh set new single sale day volume and turnover records as 321 cars sold for a new benchmark turnover of £3.5m.

In response to the growing demand, it has launched an additional LCV sale in Glasgow every Monday at 2pm in addition to the established sale every Friday at 9.30am.

BCA Kinross has launched a new sale for Arnold Clark and is offering 130 cars direct every Wednesday at 5pm, while BCA Livingston has consistently recorded 100% conversion rates for Motability in the regular Wednesday sale in recent weeks.

Stuart Beith, regional operations director (Scotland) said: “The market is going from strength to strength and this September, BCA is on track to sell record volumes of cars and vans in Scotland.

“With new business wins and increased volumes of stock from existing vendors, BCA has launched additional sales to meet the demand.  It is a real testament to the buoyant used vehicle market in Scotland at the moment.”