Used car prices increased by 5% as diesel vehicle prices rose 2% in September, according to the latest data from the Auto Trader Retail Price Index.

Auto Trader said that the average price of a used car in the UK is continuing to grow, reaching £12,436 last month – a like-for-like increase of 5% on the same period last year.

Analysis of more than 500,000 trade used car listings was combined with dealer forecourt and website data to establish the insight which seemed to indicate that used car buyers are less inclined to shy away from a diesel car purchase.

According to the SMMT, new diesel registrations dropped 21.7% in September, marking six consecutive months of decline, but Auto Trader’s used car data showed that the fuel is showing greater resilience.

Since August diesel vehicles prices have started to grow again, according to Auto Trader’s data, and in September the average price of a used diesel was £14,360; an increase of £282 on the previous month.

This represents an annual increase of 2% on a like-for-like basis (adjusting for changes in the mix of cars being sold at any point in time). 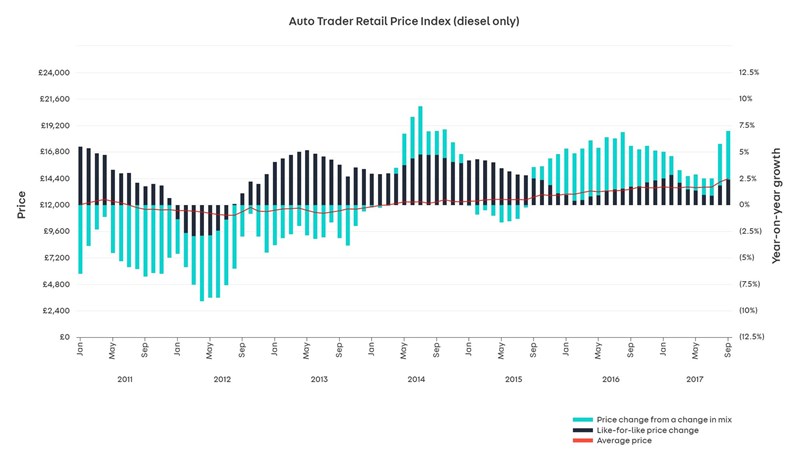 Karolina Edwards-Smajda, Auto Trader’s retailer and consumer product director, said: “The fuel debate, and ultimately the speculation around the future of diesel, began in earnest following the London Mayor’s call for a national scrappage scheme in November last year.

“As a result we saw an immediate impact on our site as well as across the wider retail sector – the rate of growth for used diesel prices began to slow and the share of searches on Auto Trader dropped significantly.

“However, since early this summer these trends in searches and prices have started to reverse, and whilst September’s SMMT results illustrate a clear impact on new diesel registrations, our data demonstrates its resilience in used car prices.”

Diesel continues to be significantly outperformed by petrol, however. The average price of a used petrol car saw a monthly increase of £223, rising to £10,029 – a 10% like-for-like increase on September 2016.

Since November 2016 the number of searches for diesel cars has steadily declined in line with negative commentary. However, since May 2017 this decline has started to reverse with diesel searches rising to 56% of all fuel searches in September, with petrol dropping to 40%.

In August, diesel accounted for 55% of searches and petrol 40%.

Diesel remains ‘right choice’ for many as used prices rise

Diesel remains ‘right choice’ for many as used prices rise