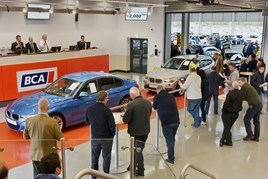 The remarketing specialist’s monthly Pulse Report showed that the average value of a used car rose by £247 from September despite the usual seasonal fluctuations around the October half-term school holidays.

Year-on-year, the headline figure was up by £773 - equivalent to an 8.9% increase in average values.

Stuart Pearson, BCA managing director UK Remarketing, said: “October was another busy month at BCA with plenty of competition from professional buyers across the range of stock on offer.

“We experienced good levels of demand from buyers, with just the usual seasonal distraction of the half-term holidays towards the end of the month.

“Online trading was strong throughout, with BCA reporting record traffic for Live Online in the first week of October and sales penetration rising to 28% across the board, a year-on-year increase of four percentage points.” 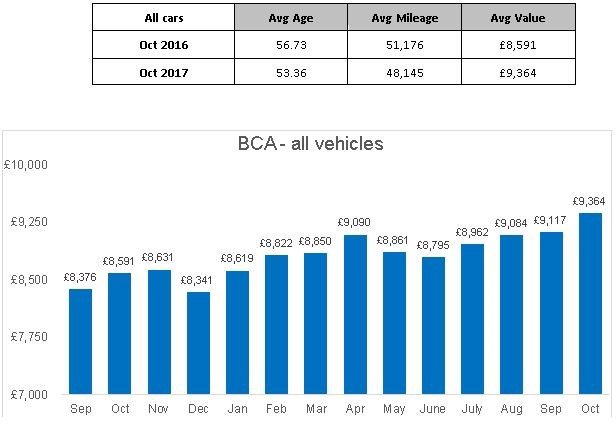 While values for nearly-new vehicles fell from £19,225 to £17,853, with average age rising from 8.25 to 8.55 year-on year and mileage from 8,412 to 9,005, average values for fleet and lease cars continued to rise and were at record levels for the third month running as buyers focused on good quality, well-specified one-owner cars.

Average values continued to rise in the fleet and lease sector, improving for the fourth consecutive month and reaching a record level for the third month running.

Average dealer part-exchange values fell marginally from the record level seen in September, but were the second highest on record and demand remained strong in the sector, BCA reported.

Having reached record levels last month, dealer part-exchange values fell by just £17 to £4,740 in October as demand remained strong.   Year-on-year values were ahead by £96 (a 2.0% increase), with average age and mileage little changed over the period.

Pearson added: “As we approach the end of 2017, many dealers will often start to build stock levels in readiness for the typically busy first quarter of the New Year.

“BCA is anticipating a healthy supply from all sectors throughout December and has a busy program that will keep stock churning for our vendors and buyer interest fuelled.”

How to boost your used car earnings

How to boost your used car earnings