Auto Trader has reported that online searches for diesel powered used cars reached a new record low in March as their price failed to keep pace with their petrol equivalents.

The percentage of online searches accounted for by diesel fell to 51% in March as petrol searches rose from 43% to 45%.

Overall used cars sold via the Auto Trader online marketplace reached £12,732, a 6% increase on the same period last year on a like-for-like basis “with the levels of growth recorded in January and February”, it said. 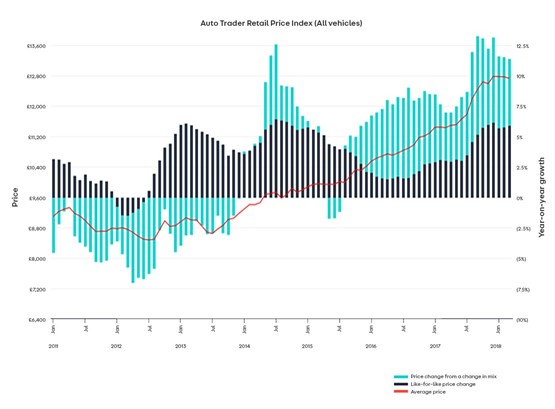 “We list more than 450,000 cars each day on our marketplace, so this is comprehensive data that is clearly pointing towards a resilient pricing environment.

“However, we have seen price growth start to flatten out, both in diesel and overall, since the end of last year.”

The proportion of searches for alternatively fuelled vehicles on Auto Trader (including electric, hybrid, bi-fuel, petrol ethanol and LPG) hit a record high of 5% in March, up from 4% in January and February.

Edwards-Smajda said: “It’s exciting to see that consumers are, albeit slowly, beginning to see alternatively fuelled vehicles as viable options.

“However, there are still some very real barriers hampering more widespread adoption. Our March market report found that 59% of recent car buyers who chose not to purchase an electric car were put off by the upfront expense.”

The Auto Trader Retail Price Index combines data from over 500,000 daily trade used car listings and dealer forecourt and website data to give its reflection of the live retail market.

AM Poll
What is your take on the car retail sector's ongoing vehicle supply shortages? Please leave a comment
Vote
View all
4440