Used car prices on Auto Trader declined by 0.7% in May as the number of online searches for diesel-fuelled cars dipped below 50% for the first time.

The average price of a used car being sold on via the online platform dropped by £93 in month-on-month during May, however, average prices remained 7% up on a year-on-year basis and remain near record highs, according to Auto Trader’s data.

Karolina Edwards-Smajda, Auto Trader’s retailer and consumer product director, said: “Month-on-month used car prices have come off the boil slightly in May, but this follows the plate change in March which tends to result in an influx of good quality and higher value stock into the market.

“In general, used car prices remain near record highs and have stayed robust over the last year despite a choppier new car market.” 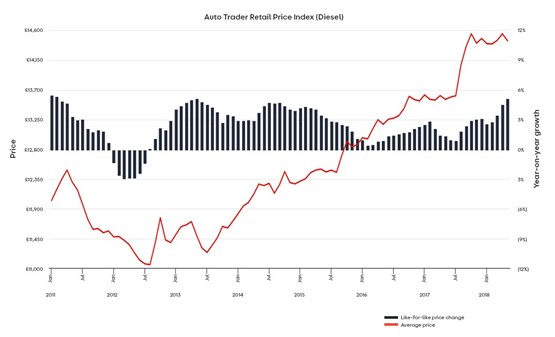 Year-on-year, on a like-for-like basis, prices for used diesel and petrol vehicles were 5% and 9% up, respectively, Auto Trader said.

However, the volume of searches for diesel vehicles on Auto Trader continued a long-term decline in May, falling below 50% of fuel-based searches for the first time.

Of these, diesel accounted for 49% of searches and petrol for 47% in May.

Searches for diesel vehicles have fallen dramatically in recent years, dropping from 71% in November 2016.

Edwards-Smajda said: “What we are seeing fairly clearly now, from both search and price data on our platform, is the dwindling popularity of diesel.

“Ongoing uncertainty has rattled consumers and put them off purchasing, despite the fact that newer diesels are the most fuel-efficient, environmentally friendly and cheap option for a significant segment of motorists.

“We urgently need more clarity from government on the strategy and timeline for shifting to lower-emission vehicles, and how consumers will be supported along that journey.”

Auto Trader noted that the most marked fall in used car prices during May applied to vehicles aged between one and three years, with a small decrease in the five-to-10 year age bracket and month-on-month increases in all other age categories.

As with petrol and diesel however, the average price for alternatively fuelled vehicles was up on a year-on-year basis, recording like-for-like growth of 4%.

Seeming to buck the notion that demand for EVs is on the rise, meanwhile, was a reduction in the proportion of searches for electric vehicles on Auto Trader from 5% in March to just 3% in May.