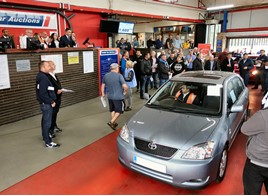 The event included more than 540 part-exchange cars, with almost 700 Motorline vehicles offered on the day.

More than 90% of the cars entered were sold – the highest one-day sales volume achieved at the Paddock Wood centre.

Hundreds of buyers participated in the Motorline Mega Sale, with nearly 800 logging on to bid via BCA Live Online to compete against the large crowd of buyers in the auction lane.

Motorline and BCA also staged a special charity auction that raised over £3,000 for Royal Brompton and Harefield Hospitals Charity.

A 2003 Toyota Corolla Spirit (pictured), donated by Motorline, sold for £1,600.  A signed Arsenal shirt donated by Ashely Westpfel, funding director at the charity, raised a further £450, while a football and team shirt signed by Chelsea’s FA Cup winning side, donated by Matt’s Autos of Walton-on-Thames, also sold for £450.  JJ’s Clay Shooting Club of Dartford donated a clay pigeon shooting experience, which sold for £400.  Further funds were raised from additional private donations on the day.

Chris Willett, group used car buyer at Motorline, said: “This was a remarkable sale which set new benchmarks for the remarketing partnership between Motorline and BCA.  I’d like to thank the team at BCA Paddock Wood and their customers for helping Motorline to raise over £3,000 for this most worthy cause.  Royal Brompton and Harefield Hospitals Charity does fantastic work raising money for equipment, research and amenities that fall outside the scope of NHS funding.  The Charity’s projects are often vital to patients’ lives and wellbeing, making these hospitals not only excellent but extraordinary.”

Jon-Paul Paviour, auction centre manager for BCA Paddock Wood, added: “This was a fantastic sale with a terrific selection of stock provided by Motorline and some exceptionally competitive bidding throughout the day.  We are proud to have been part of this record-breaking sale event and look forward to raising the bar even higher for the next Motorline Mega sale.”