The growth in used car retail prices reached its lowest point since August 2017 as online enquiries reflected a surge in interest in electric vehicles (EVs) and hybrid vehicles, according to the Auto Trader Retail Price Index.

The online new and used car classified advertising specialist said that it expects alternatively-fuelled vehicles (AFVs) to account for 10% of all online car searches by early 2019 following last month’s growth in online interest.

But retail prices could be levelling slightly, it seems, as retailers battling limited supply of new cars due to the introduction of the Worldwide Harmonised Light Vehicle Test Procedure (WLTP) squeeze their margins in the fight for a slice of an ever-more competitive used car retail sector. 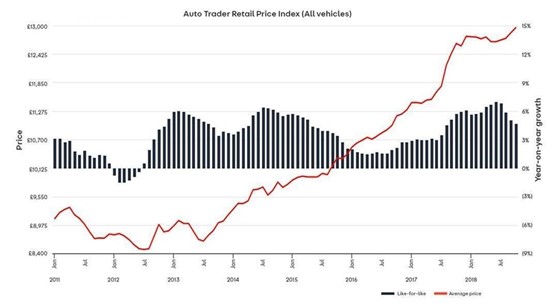 The average price of a used car rose 5% year-on-year to £12,965 last month, marking the lowest rate of growth in used car prices since August 2017.

Consumer appetite for AFVs appears to be growing, however.

As the latest used car data from the Society of Motor Manufacturers and Traders (SMMT) indicated that sales of second-hand AFVs had grown at a record rate during the last quarter (28.6%), Auto Trader saw a similar trend on its marketplace.

Over the last three months the percentage of fuel related searches attributed to AFVs has increased from 4% in July, to 7% in October, having remained flat for the previous 12 months.

Karolina Edwards-Smajda, Auto Trader’s director of commercial products, said: “Every possible bellwether and metric is pointing to a significant uptake in low emission cars, in both the new and the used markets.

“The technology is more sophisticated, finance is making them more accessible, and above all, the consumer is more informed, which means the traditional barriers to entry are becoming less of an issue.

“The trajectory for greater adoption is looking very promising, however, the government’s road to zero ambitions are still a long way to being realised.

“They’re hampered by an at best confusing rhetoric that seems more focused on penalising fossil fuelled drivers, rather than rewarding those embracing new technologies.” 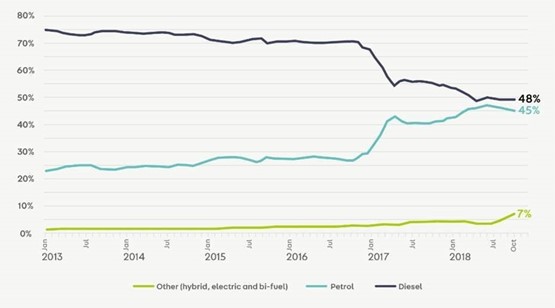 Auto Trader’s monthly report said that the increase in online searches for AFVs had come largely at the expense of petrol rather than diesel vehicles.

The growing popularity of used AFVs was reflected in the number of low emission vehicles tracked by the Auto Trader Retail Price Index, which combines and analyses data from over 500,000 trade used car listings every day, as well as additional dealer forecourt and website data.

From October 2017 to October 2018, the Index recorded a 34% increase in AFVs being sold. Much of the growth has come from an increase in petrol hybrids and petrol plug-ins.

The Index showed that in October the average price of a second-hand alternatively fuelled vehicle was £20, 573 – an annual growth of 3%.

Looking at specific types of AFVs however, the average price of a pure electric vehicle (£19,475) increased 13% year-on-year, the largest growth of any other fuel type tracked by the Index.

Edwards-Smajda continued: “Despite the confusing rhetoric used diesel continues to show its resilience. Not only are they holding their value but are in fact increasing in price.

“However, whilst it’s reassuring to see diesel perform so stoically, the writing is clearly on the wall.

“As the barriers to mass adoption of low-emission cars continue to fall, it’ll be interesting to see how long they’ll be able to hold their own, especially if the government chooses to incentivise consumers to make the switch from fossil to electric.”