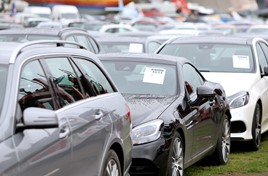 Car retailers are preparing to accelerate their investment in used car sales for as the sector shows “no signs of slowing in Q3”, according to a survey carried out by Manheim.

The remarketing specialist’s owner, Cox Automotive, said in a statement that the survey’s results indicated that four-in-five dealers report having investment plans to support their used car business in 2019.

Half of the survey’s 240 respondents said that they planned to invest in additional used car stock, while one in five say they will be investing in preparation facilities, including reconditioning and retail ready capabilities.

Additional used car retail locations will be added by 7% of respondents, meanwhile.

“Looking at both this sentiment and our latest trading data, there’s no sign of a slowdown as we head into the festive season, and plans highlighted for 2019 indicate a continued ambition for their used car businesses.”

Manheim’s survey did reflect a degree of uncertainty surrounding stock availability to the end of this year, however.

Just over half of the dealers (52%) reported being ‘quite confident’ about the availability of used cars stock, while a further 10% claimed that they were ‘very confident’.

Cox said in its statement that the sentiment corresponded with the uplift in buyer activity reported by Manheim in October.

In response to wholesale prices strengthening and a shortage of used vehicle stock, dealers are taking a hands-on approach to sourcing used vehicles, creating a buzz in the auction lanes, it said.

Nothard said that it was “interesting to note” how dealers are looking to invest to support their used car businesses in 2019.

He added: “The number of those looking to invest in preparation facilities suggests a rising appetite to accelerate days to sell and manage margin in parallel with increasing stock volumes.

“But for any serious ambitions of growth to be realised, we need new vehicle sales to return to normal patterns and the dam currently restricting the flow of used stock into the wholesale market breaching.

“Figures published in recent weeks about the volume of new cars yet to complete their WLTP testing does leave some cause for concern, but I remain confident significant ground will be made on this by the close of the year, paving the way for a very buoyant first quarter of 2019.”