The used car market in March was a story of two halves and market sentiment would appear to suggest that the retail consumers were more fickle than they have been for some time, according to Cazana director of valuations Rupert Pontin.

Pontin said that this mixed performance should not have come as a surprise as March can be a complex month given that the new registration plate often draws attention away from used cars to the new car market.

“Combine this with the unbelievable farce that the government call Brexit and lower footfall and reduced enquiry levels were almost a given”, he added.

“However, the new car market decline in registrations of 3.4% over the same period last year, whilst disappointing, also helped the used market as a lack of demand for new cars appears to have shifted enquiries to the used car market.”

There has been a great deal of speculation as to when the used car market will start to slow down and if one were to listen to some of the anecdotal discussions in the trade as a whole today, then March may have been deemed the turning point.

The reality in today’s modern auto retail market is that the facts come from the retail market, the consumer and not subjective discussion and manual intervention in pricing structures.

The chart below shows the performance of used car retail pricing at key age and mileage profiles: 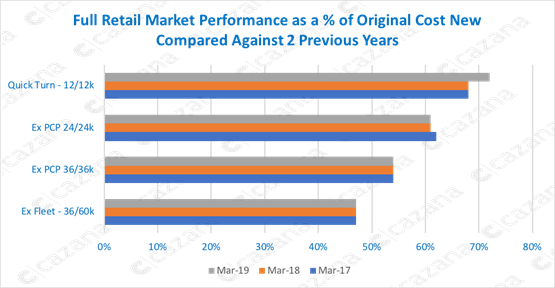 This chart compares retail pricing as a percentage of original cost new at key age and mileage profiles for the month of March 2019 with the same period in the two previous years.

It is clear that in all but the 24-month-old ex PCP profile, retail pricing has not weakened.

As identified and explored in last month’s release the two-year market is perhaps just beginning to become a problem and this will be entirely due to the practice of OEM’s moving the customer to a new car once parity on value and outstanding balance is met.

The performance of the ‘quick turn sector’ continues to remain solid still boosted by the lack of new cars being pre-registered and retail pricing is 4ppts higher than at the same time in the previous two years.

Changes in the shape of the new car market will in time force a shift in the used market, and the most obvious distortion to the new market in the last couple of years has been the volume of diesel cars being registered as new.

With what now appears to be a very real demise of diesel in the new car market for the short term, there has come an increase in hybrid and electric sales.

New vehicle registration data highlights that alternative fuel vehicles (AFVs) have now taken 5.8% of the market year to date and this is a 14.7% increase year on year which is beginning to rise to the levels needed to bring the country in line with emissions aspirations and targets.

With changes of this proportion in the new market it will now be essential to monitor what is happening in the used car market.

The chart below tracks the used car pricing performance by fuel type across the last 12 months at the key ex-PCP age of two years: 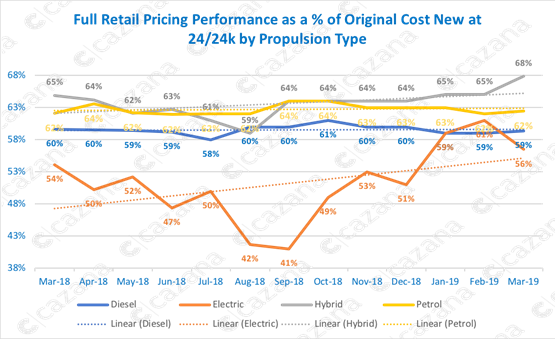 That above chart shows very clearly the strengthening in retail pricing of both hybrid and electric vehicles (EVs) which directly reflects the success in the new car market. These are the only two propulsion types to demonstrate a clear upward move in retail pricing terms in a market age profile that is currently experiencing a marked increase in volume.

Hybrid pricing performance is more steady than electric and shows a 3ppt uplift over the previous 12 months and this undoubtedly reflects the greater retail consumer confidence in these cars.

It is also very interesting to acknowledge the significant upturn in pricing levels just before and after the removal of the Plug In Car Grant (PICG).

Electric propulsion pricing strength is attributable to the greater volume of cars coming to the used market with more usable driving ranges.

It is also significant to note that diesel prices have fallen by just one percentage point year on year whilst petrol has remained steady.

For some, this is seen as being very lucky for diesel by comparison to the new market and yet at the same time concerning that demand is still so strong for a polluting fuel type.

In summary, March was a tougher month than some businesses expected and there is little doubt that wavering consumer confidence driven by Brexit concerns was to blame.

There is nothing that the industry can do for the moment other than get used to the fact that the ride is bumpy.

However, whilst it may be more difficult to do business demand is still evident and pricing is as steady as it has been in the last 12 months but the key will be to be aware of all market factors and to use as much real time data as possible to stay in tune with market fluctuations to ensure the best return on investment.