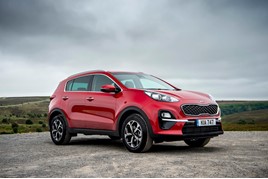 The Kia Sportage SUV is the UK's most in-demand used car, according to the results of research conducted by ChooseMyCar.

Top five most in-demand cars (according to Google searches) are:

Used car buyers are favouring more affordable models than they did last year, according to data from used car supermarket Imperial Cars, which was acquired by online car retailer Cazoo this week.

ChooseMyCar's research also found the MG ZS as the best value used car, taking into account the average price and mileage of all vehicles with at least 50 live listings.

It said that the MG ZS, a crossover SUV with an average price of just £13,731 and average mileage of just over 6,000 miles, is "much cheaper than your average family SUV and also comes in an electric version called the ZS EV".

The Citroen C3 Aircross was the second most in demand used car with a higher average mileage of 10,334, but a cheaper price range than the ZS, £11,315.

The Suzuki Celerio came in third place, with an average price of just £5,700 and an average mileage of just over 16,000 miles.