There is little doubt 2015 has been a productive and successful year for both new and used car dealers. As predicted by Glass’s more than a year ago, UK new car registrations topped 2.6 million last year, a figure that the rest of the industry did not believe was achievable 12 months ago.

This new car registration success story has been strongly supported by pre-registration activity, and PCPs have been the key to keeping private new car sales moving in partnership with a vibrant fleet sector. Couple the new car picture with growing used demand, firmly bolstered by a steady and developing economy, and it is not hard to understand why the UK motor trade is feeling fairly confident at the moment.

In terms of used car values, one must appreciate that there have been more cars coming to the market during 2015. New car sales success from several years ago is filtering back into the used market and coupled with pre-registration models there has been a greater downward pressure on values, particularly in the latter part of the year. The chart below confirms this activity and shows the residual value performance of petrol cars as a percentage of their new cost across all sectors at specified ages. Of particular note is the 3.27% drop on a one-year-old car. 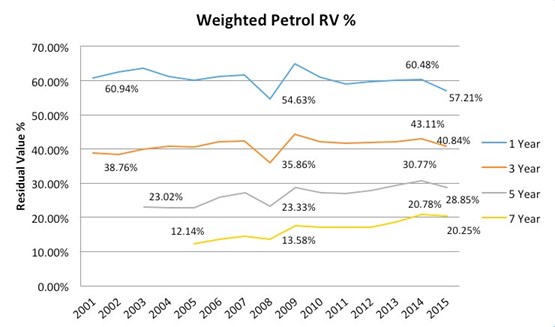 However, it is the diesel market that has been the talk of the trade and that has been as a result of the high real-life NOx emissions of some of the older diesel cars. This has been exacerbated by the debacle that is VWgate and there are now a number of ill-informed individuals seeking to demonise diesel propulsion as a whole and trying to tax diesels out of city centres and off our roads completely.

This would not only cause a significant personal difficulty to myriad diesel owners nationwide, but also cause high costs to large and small businesses across the country, most of whom rely on diesel commercial vehicles. That may also result in an increase in the cost of goods to the consumer, which would be an unwelcome instability.

The next chart gives a similar summary for diesel engine cars and once more it is evident that the later-plate cars have seen a greater drop in residual value percentage terms than older cars but, more significantly, the diesel car is still worth notably more than the comparative petrol model. This is particularly evident when comparing three-year-old cars. 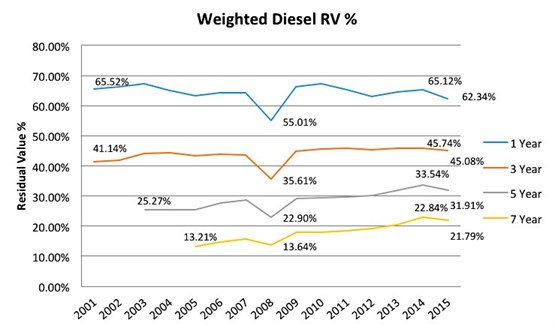 Accepting that used values have been moving downwards at a consistently greater rate all year, it is time to consider what will happen during 2016.

Glass’s expects that registration activity will continue to increase, but at a slower rate than in 2015. Fleet business will carry on improving and private sales will see more and more competitive additions to the PCP schemes available to ensure stock keeps selling. Overall, the new car market will increase by 3% in the face of an ever improving economic outlook that will see interest rates stay stable until much later in the year.

Looking at the used car market, things will become a little more difficult for vendors, who will be defleeting cars into a landscape that is returning to a pre-recession appearance. A wider choice and higher volumes will perpetuate the shift from a “vendor” to a “buyer” market resulting in greater downward pressure on values across most age ranges. This will most certainly be pushed hard right from the youngest age as a result of pre-registered cars coming to the market.

However, while values will be pressured, the winner will be the retail consumer, who will have a wider selection of cars to choose from, coupled with new exciting finance packages being developed to keep the interest in a used car when new cars look such good value.