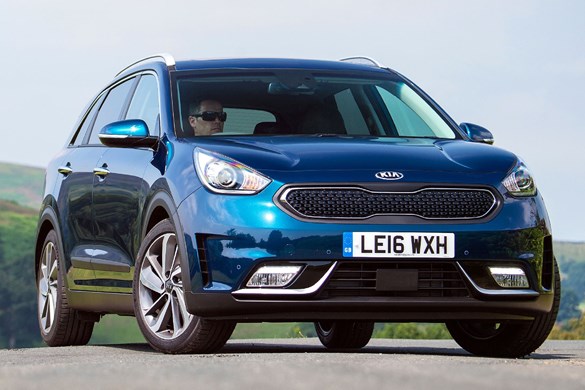 Niro has been launched as a mild hybrid, with a battery-fuelled electric motor boosting its petrol engine. But it will have greater potential to tap into a growing customer base when a plug-in hybrid follows in 2017.

Niro, with combined fuel economy of up to 74.3mpg and CO2 emissions starting at just 88g/km, joins the pure-electric Soul EV in Kia’s green-car line-up and will soon be followed by the Optima plug-in hybrid.

Given the demand for compact cars with SUV styling and driving positions, Kia’s design teams in Korea and the USA have come up with a sleek crossover SUV bodystyle which will boost the chances of the car’s success. It’ll comfortably seat five people and comes well equipped, so despite its £21,295 starting price dealers could persuade some existing top-spec Cee’d owners to trade up to the Niro.

Based on an all-new platform which will only ever be used for electrified vehicles, Niro has a newly-developed powertrain featuring a 1.6-litre, 104bhp internal combustion engine and a 43bhp electric motor driving through a six-speed dual-clutch automatic transmission. Although there is not a selectable pure electric mode, when driven extremely gently it can travel up to two miles under battery power alone, says Kia. And while it is not quite as green and efficient as the market-leading Toyota Prius, which claims 70g/km CO2 and 94mpg, it is about 10% cheaper.

sound system with a 320-watt external amplifier. Its 18in wheels mean the CO2 emissions and fuel economy worsen, however. The top-of-the-range First Edition version also has standard autonomous emergency braking and adaptive cruise control, both extra cost options on lower grades, plus a sunroof, heated seats and keyless entry and start.

Niro is also the first Kia with Android Auto, which works with Android smartphones running 5.0 or higher. The smartphone is connected to the car’s infotainment system and, through pre-downloaded apps, gives access to a variety of services such as Google Maps navigation, Google Play music, hands-free calls and texts and voice recognition.

Unlike the Soul EV, which was sold through a small number of Kia dealers, the Niro and Kia’s other forthcoming hybrids and EVs will be part of the portfolio for the whole retail network. Commercial director Simon Hetherington told AM he has a conservative ambition of 3,000 to 5,000 full year sales. Fleet customers, expected to take 60% of supplies, are likely to prefer the tax-efficient grade 2 Niro, with retail buyers mostly attracted to grade 3.