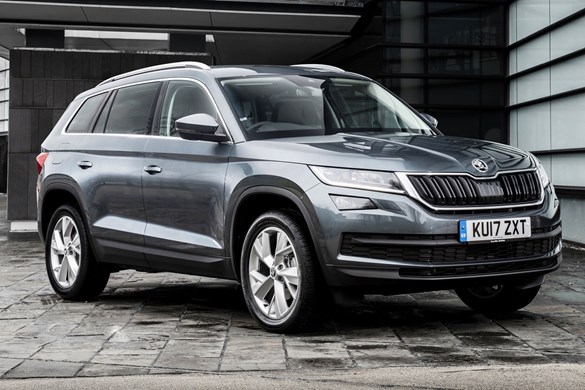 Škoda dealers have launched the largest extension to the carmaker’s line-up since its Superb flagship saloon hit showrooms in 2002. Škoda’s six-car range – Citigo, Rapid, Fabia, Yeti, Octavia and Superb – has become seven thanks to its first large SUV, the Kodiaq.

At 4.7 metres long and built on the same MQB platform as the Octavia, the Kodiaq is 4cm longer than the Octavia, but 16cm shorter than the limousine-like Superb. With seven seats standard or optional on all trim levels except the cheapest Kodiaq S, this spacious 4x4 will ensure Škoda dealers set their sights squarely on established families who want to follow the SUV trend.

Sales executives will need to brush up on their tech knowledge, however. The Kodiaq has the broadest range of driver assistance systems ever available in a Škoda car.

It also houses the carmaker’s first in-car connectivity service. Škoda Connect is standard for the first year, through an integrated SIM card, and allows the owner to access the Kodiaq remotely by smartphone or PC to pre-load navigation or activate the lights. It also allows Škoda to put a dealer in touch before a service falls due, with the aim of boosting aftersales retention, and allows the car to alert a contact centre after a crash or other emergency.

Add standard City Emergency Brake and optional systems such as adaptive cruise control, a blind-spot monitor with rear traffic alert, or trailer assist to auto-steer the car when reversing, and a customer coming out of a four-year-old part-ex Octavia may need a while to digest it all.

The technology ought to enhance a prospective buyer’s perception of value. Just £21,565, or £209 per month after 25% deposit on a 43-month PCP, will get the keys to the cheapest and slowest five-seat Kodiaq S. But while the clever pricing lends itself to Škoda’s marketing campaigns, the carmaker said few of this trim will be sold. Demand is expected to be greatest for the better-equipped SE, which is just £1,450 more, or £2,450 with third-row seats.

That a Škoda sales exec could put a buyer into a new seven-seat SUV for less than £25,000 is remarkable. Few rivals could do it, except Nissan (X-Trail) or SsangYong (Rexton). The price rises if the buyer shuns petrol, of course. The cheapest Kodiaq SE with a diesel under the bonnet and enough seats for a small ballet class comes in at £28,115, comparable with many competitors.

Plenty of retail customers – predicted to account for two in three registrations – will be happy with the SE trim’s 18in alloys, rear parking sensors, auto lights and wipers and eight-inch touchscreen infotainment system. Company car user-choosers and private buyers who want more gadgets, such as sat-nav, Wi-Fi, Alcantara upholstery, heated front seats and a powered tailgate, should opt for SE-L trim, which starts at £28,650 (petrol) and £30,465 (diesel). An Edition trim crams in even more luxuries, and Scout and Sportline trims will be added later.

With the third-row seats folded, there are 630 litres of boot space, rising to 2,005 litres with the middle row down.

Of the three engine variants, the 1.4TSI petrol and 2.0TDI, both in 150PS form, are set to be most in demand. On the press launch, we found the 1.4TSI should hit the spot for any private buyer, with a combination of reasonable pace and fuel economy – we saw 46mpg on the trip computer. With a DSG auto gearbox, this variant is available in two-wheel or four-wheel drive, with the latter topping the range with a 2.3-tonne maximum towing weight. 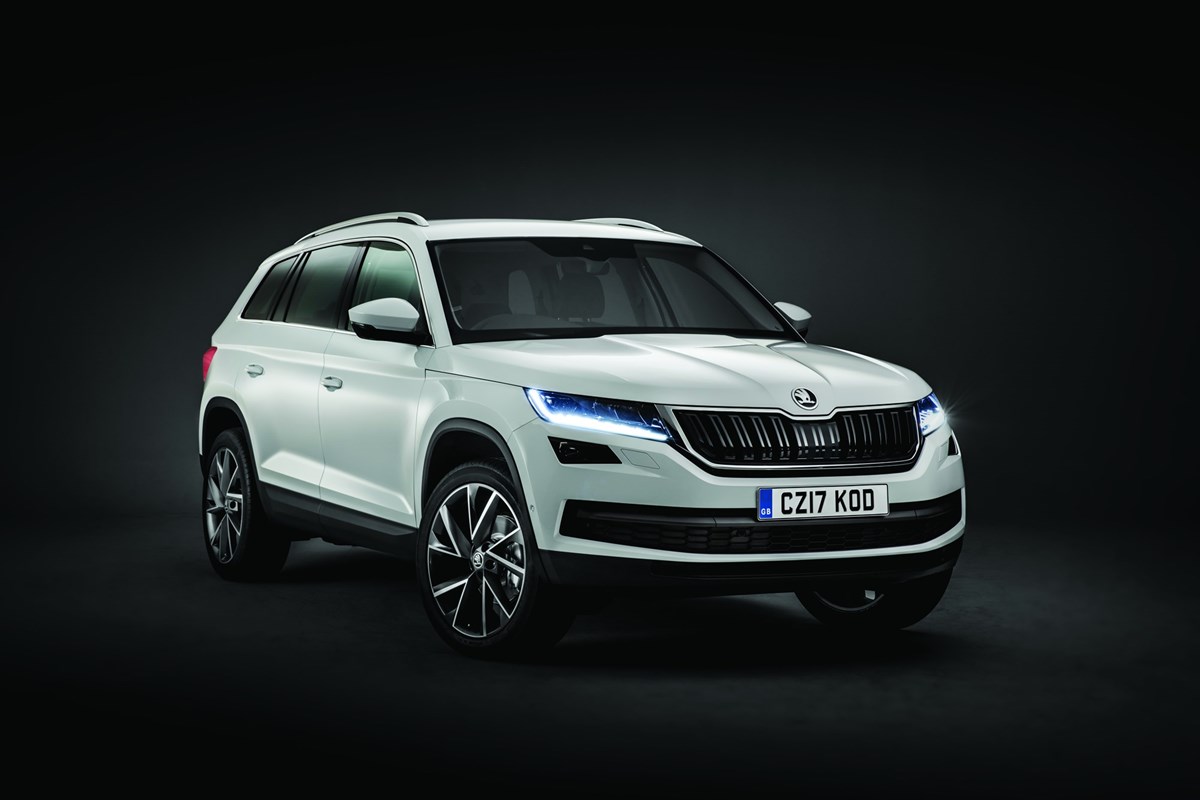 What does the new Kodiaq mean to the brand?

It’s super-important to us. It sits in the fastest-growing segment in the UK, and it takes the same design cues that we’ve seen on the Superb, which has been fantastically successful, and moves that forward. It is really helping move the Škoda brand forward in customer perception, and it will reach a wider appeal than Superb, simply because the market for SUVs is so much bigger. It will take us in a whole new direction.

Overall, Kodiaq volumes will respond to customer demand. I’d guess we will look at 8,000-10,000 units in a full year (with an expected 65%/35% retail/fleet split), but as we are launching after Q1 we will be at the low end of that this year.

Do you expect a reasonable proportion of customers from other brands?

Kodiaq is a new product for us so clearly it gives us some opportunity in that larger SUV space. There will be a significant number of conquests, how many is difficult to quantify.

Does Kodiaq give somewhere for your Superb customers to move to?

What support have you put in place to raise awareness of Kodiaq’s launch?

We held a VIP event in showrooms about a month ago, a kind of roadshow, with a left-hand drive car, to launch the car to some of the early interest prospects. That was well received, and the dealer networks launch on April 6 has given them the chance to get talking to people and arrange test drives.

We have launched our finance offers on our website, together with a finance calculator for customers to work out their own PCPs. We have filmed an advert for the car which will be on TV in April, together with other activity such as billboards and social media.

What is further ahead for the network?

New Octavia is out now with a facelift, followed about a month later by the VRS version, which is about 20% of the mix, so is a very exciting derivative. There are facelifts mid-year to Citigo, Rapid and Rapid Spaceback, and then the new Yeti comes right at the end of the year. For our retailers there’s a lot to look forward to.