Suzuki Swift Sport: It has the pace to compete, but is the price right? 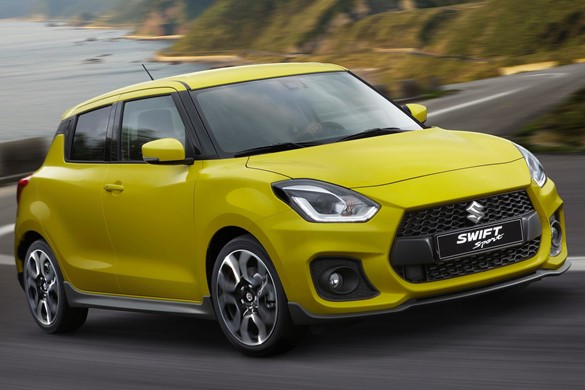 Fans of the Suzuki Swift Sport, a standout ‘warm hatch’ available for less than £14,000, must have been somewhat taken aback at the latest iteration’s £17,999 price tag. That may go some way to explain a launch offer from Suzuki GB – announced shortly after AM attended the Sport’s launch – that cuts £1,500 from the list price of the new model, and tacks on a £750 deposit contribution from the manufacturer for finance sales.

The 30-day offer was in place for new and existing customers from the arrival of the Sport in UK showrooms on June 1.

Suzuki claims the new model packs more standard equipment and is still more affordable than more potent rivals, but the new price tag does pit the Swift Sport against the more powerful 150PS

At 140PS, Suzuki’s newcomer  packs just 5PS more than its predecessor, but it  delivers greater torque after swapping out a normally aspirated 1.6-litre engine in favour of a turbocharged 1.4-litre (seen elsewhere in Suzuki’s Vitara and S-Cross SUV ranges).

This increases torque by 44% to 250Nm. In conjunction with a 70kg reduction from an already svelte frame, to just 975kg, it delivers an impressive response.

Suzuki’s performance hatchback may be off the pace of those more powerful rivals, but on the give and take roads of the launch test route outside Dublin, its torquey performance proved it could deliver the fun its styling alluded to.

Being so light, the Suzuki does seem to be able to tread a little lighter on the tarmac than some rivals.

Supple suspension coasts over broken and undulating road surfaces to such a degree that the ride of the Swift Sport should be one of its greatest selling points.

In fact, it is a very liveable reimagining of the performance hatchback, a point re-inforced by a 25% increase in boot capacity to (a still rather modest) 265 litres.

Of course, it holds kerbside appeal thanks to its trim-specific aggressive front bumper, twin exhaust pipes and faux diffuser at the rear and wearing the new, no-cost option of Champion Yellow paint, it certainly stands out.

A standard trim exists across the range, the only option being a sticker pack, which had yet to be priced when we drove the car.

Suzuki claims the Swift Sport’s standard features are what sets it apart from the crowd.

Among the standard features, many of which may have to be added as options in other cars, are: DAB radio with Bluetooth, LED daytime running lights, 17-inch wheels, a rear-view camera, satellite navigation, keyless entry and start, LED headlights and adaptive cruise control.

There is also a lot of safety equipment (which had to be disabled while we ventured out on track at Ireland’s Mondello Park race circuit) including a collision detection system with autonomous braking and a lane departure warning.

Out on track, the car was a hoot. Mondello is a tight, short circuit with a level of technicality ideally suited to the Swift Sport.

While its relative lack of power was apparent, there was fun to be had in spades from a supple and adjustable chassis.

While it remains a tough call for the Swift Sport to be compared to hotter rivals priced just a small amount more, lower insurance and running costs, as well as a greater level of day-to-day comfort, could carve it out a worthy niche.

Despite the increase in price – and a corresponding increase in the amount of standard equipment – the Swift still looks like good value for money, a trait that has been central to the success of a car that has found 11,535 new owners in the UK since 2006.

Ultimately, the bright yellow performance flagship felt fast enough on the narrow rural roads of Ireland, and Suzuki dealers selling to customers that want a fun-but-comfortable hatchback may not have the toughest job in persuading them they need look no further.

Swift Sport has clearly become a fixture of the Suzuki line-up in UK dealerships. What are the sales prospects of the new iteration?

This model will account for about 20% of our Swift volume in the UK, so something in

The British love a hot hatch and that’s why the Swift Sport has done so well for us. Since

What are the key changes that owners of the existing model are likely to pick up on straight away when they get behind the wheel after June 1?

A lot of effort has gone in to ensuring that the new Swift Sport retains the zest of the old car, but adding some flexibility and improved motorway performance with the new engine.

Having something that can please you on the lanes, but still allow you to switch off a bit and listen to your music when the mood takes you, is a real strength, I believe.

You took journalists on the track during the launch event. Do you think that is the kind of activity that retailers might organise or encourage?

They certainly could. The car is lightweight and really entertaining. The torque-to-weight ratio is really high. We see the car as sitting between warm and hot. We know it’s not a rip-snorting 200PS hatchback, but it is more than a warm hatch so we think it would be very hard to have more fun for your money.

Look at the list price of a top spec non-sport competitor car, you can buy a Swift Sport for less.

The car’s full of technology. We could have shaved a thousand pounds off the car and sold it £1,000 cheaper, but we think that we got the balance right.

Is there a specialist marketing campaign to announce the new Swift Sport’s arrival in the range?

I think the initial buyers will be existing Swift Sport owners, but there is a huge army of people waiting to try it.

I don’t think it needs a traditional campaign to launch it, I think that’s the second phase. I think the first phase is to let enthusiasts try it, believe it, and get cars out onto the roads.