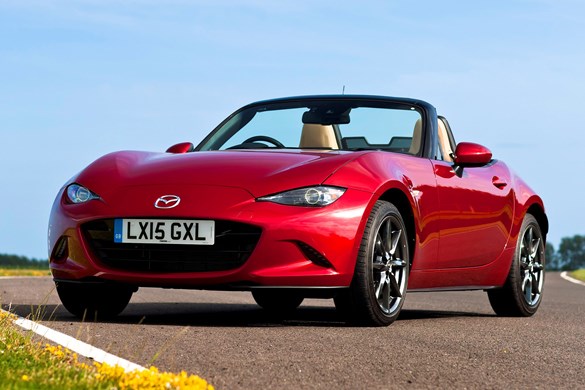 September was an important month for Mazda’s UK dealer network. Not only was it marked by the arrival of the 65-plate and changes to the way GAP insurance can be sold, but the new Mazda MX-5, the brand’s sporty halo model, went on sale.

The fourth-generation MX-5 is Mazda’s third new model of 2015, after the Mazda2 supermini in the spring and the CX-3 compact crossover SUV in the summer.

Like the latter cars, the MX-5’s arrival was preceded by a campaign of dealer preview events. Mazda UK hosted a four-day ‘raise the roof’ open-air music spectacle during the Goodwood Festival of Speed, complete with an MX-5-themed experience zone, while it also used the festival’s centrepiece sculpture to showcase its endurance racing pedigree.

Understandably, it has been making a lot of noise, because the MX-5 is an iconic sub-brand for Mazda and a car which has an enthusiastic following. When Top Gear previewed the new MX-5 in February, just before Jeremy Clarkson’s fracas had the show pulled off TV screens, the resultant interest online caused Mazda UK’s website to meltdown.

By the time the two-seater sports car went on sale, the UK Mazda dealer network had already taken more than 1,000 orders. Mazda UK said it expects to sell at least 5,000 MX-5s annually and added that this target is “very conservative” and demand may well be stronger.

“The fun-to-drive character of the MX-5 has strengthened the bond between Mazda and its customers for 25 years” Jeremy Thomson, Mazda UK

Mazda UK managing director Jeremy Thomson said the new car incorporates efficient technology and safety measures within a driver-focused environment for which the MX-5 is loved. It’s 100kg lighter, and at 3.91 metres, it’s shorter than any previous generation of the two-seater.

Any new MX-5 comes with a manual folding cloth roof that can be unlatched and dropped in seconds from the driver’s seat. The power-fold hard-top of the old MX-5 Roadster Coupé has been dropped to save weight and cost.

Either engine can be specified with the mid-level SE-L trim, which adds climate control, LED daytime running lights, cruise control, DAB radio and Bluetooth, a 7in colour touchscreen and multimedia controller, plus app integration for internet radio, Facebook and Twitter feeds. The 2.0-litre SE-L also comes with 17in alloys, a limited slip differential and a strut brace.

Like other Mazdas, the MX-5’s top trim is Sport. For £2,000 more than SE-L, buyers will get rear parking sensors, adaptive front lights, black leather heated seats, auto wipers and lights, keyless entry and a premium Bose surround sound audio system with nine speakers. In 2.0-litre Sport guise, the car also comes with that limited slip differential, 17in alloys plus Bilstein sports suspension and a strut brace.

In line with Mazda’s policy of loading the cars with good levels of standard kit and minimising the option list, dealers’ factory add-on sales are limited to metallic or pearlescent paint at £540, a candy-rich Soul Red metallic paint at £600, and £200 to swap the black leather for tan in the Sport models.

Buyers can also choose SE-L Nav or Sport Nav, which adds integrated sat-nav and three years of European map updates for an extra £600. A safety pack, comprising high beam control and blind spot monitoring with rear cross traffic alert is a £350 optional extra only offered on the 2.0-litre Sport Nav.

At the media launch we were equipped with a competitor comparison, which shows Mazda sales executives that much more expensive competitors to its flagship 2.0-litre Sport Nav can’t match it for equipment.

The likelihood is pretty low, however, of many brand-conscious consumers with a new Audi TT, BMW Z4 or Mercedes-Benz SLK on their consideration list also paying a visit to a Mazda dealership. More squarely in the Mazda MX-5’s sights are the Mini Roadster and Peugeot RCZ, neither of which come with leather, touchscreen or sat-nav for similar money.

Where the MX-5 may struggle against its rivals is in its efficiency. Competitors’ official figures for CO2 emissions and fuel economy are better, considerably so in the case of the Mini. However, Mazda dealers can claim its Skyactiv technology ensures its own figures are closer to the real-world performance – as has already been borne out by Which? magazine tests of other models.

What your customers will read about the Mazda MX-5

The MX-5 is a simple car, but the simple stuff has been done really well. It hasn’t been overcomplicated with active-this and electronic-that. With many cars you get the sense the marketing men identified a niche, and the engineers had to build something to fit it. The new MX-5, however, does what it’s always done, but does it better than ever.

It seems it won’t be long until it steals sales from the Ford Fiesta ST, Toyota GT86 or Peugeot RCZ Coupé. It’s already the best-selling roadster in history. And it’s easy to see why, the MX-5 conjuring up a whole that seems far greater than sum of its parts – especially when fitted with the 1.5-litre engine.

There mightn’t be any ground breaking new technology to discuss, but there is a great deal of simple, solid, proven sports car engineering on display. As a result the new MX-5 feels like one of the purest new cars on sale, unencumbered by needless frills and trinkets.