Mazda2 2015 takes on the big boys of the B-segment 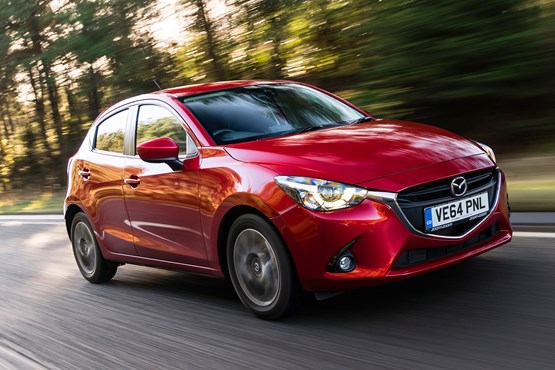 Mazda pushed the boat out ahead of the March launch on its new supermini, the Mazda2. It organised a preview tour of its UK dealerships, equipped with an Oculus Rift virtual reality headset and two pre-production cars.

A total of 120 Mazda dealerships opted to take part, hosting half-day VIP previews for customers over a six-week period. As a result, each took an average of six pre-launch orders. Colliers Mazda in Birmingham took 18 orders in one night. The Mazda dealers that opted not to host the tour took one pre-order on average.

“The headset allowed the dealers to show people all the different colours and trims offered on the car in the showroom, so they could see the car in the style they actually wanted,” said Mazda Motors UK managing director Jeremy Thomson. The tour was seen as such a success that the company is considering purchasing its own Oculus Rift system for future use, such as ahead of the forthcoming launch of the MX-5 roadster or for fleet events.

Thomson said the Oculus Rift tour was vital, as the brand wanted to sell 1,000 new Mazda2s before its financial year closed at the end of March. However, the car wasn’t going on sale until March 21. “We had 747 orders ahead of launch, with the cars still sitting on the boat,” he said.

The full-year registrations target for the new Mazda2 is 12,000 units, which will represent an increase of 3,000-4,000 units over the typical annual sales of the old model. The growth strategy – overall, Mazda Motors UK wants 24% growth in sales in its 2015/16 financial year – will mean Mazda needs to “eat a bit of everybody’s lunch”, Thomson said.

Conforming to the carmaker’s latest Kodo design ethos and Skyactiv efficiency measures, this new supermini is well positioned to rival the segment-leading Ford Fiesta, Vauxhall Corsa and Volkswagen Polo even if it can never match them on sales volume. Priced from a competitive £11,995, the core Mazda2 range consists of SE, SE-L and Sport trims. A Sports Launch Edition car is pulling initial customers in by offering higher equipment levels for £14,995.

SE-L models are expected to be most in demand as these offer the equipment most buyers will desire, such as alloy wheels, front foglamps, electric folding heated mirrors, leather steering wheel with audio controls, cruise control, DAB radio, colour touchscreen with multimedia controller and Bluetooth. The entry-grade SE misses out on all of these. Sport-specification models add rear privacy glass, auto wipers and lights, rear parking sensors, keyless entry and climate control. In addition, the SE-L and Sport can be specified as Nav derivatives, which adds sat-nav, and the most powerful Mazda2 Sport Nav gets additional LED headlights and daytime running lights.

Given that UK cars have to be shipped from the Far East, Mazda Motors UK prefers to equip the cars well as standard to avoid long waiting times for bespoke cars. Only buyers of the Sport Nav can choose leather seats, a heads-up display, blind spot monitoring or a high beam control system.

On the subject of power, an 89bhp 1.5 Skyactiv-G petrol engine is forecast to be the best seller. It’s a refined unit and its CO2 emissions of 105g/km and combined fuel economy of 62.8mpg make it the most affordable to run in the range, except for the only turbodiesel on offer, a 1.5-litre Skyactiv-D with 104bhp. The diesel has plenty of torque and made light work of Devon’s hills during the media drive. However, its 89g/km CO2 emissions and 83.1mpg economy come at a price. A £2,000 premium over the petrol alternative means it suits only buyers who will cover above-average annual mileage.

The range is completed by two further 1.5-litre petrol engines: a 74bhp offered in SE and SE-L specifications only and a 113bhp unit exclusive to the range-topping Sport Nav.

The supermini segment is the most hotly contested part of the UK’s new car market, but with the stylish and well equipped Mazda2, the dealer network should be well placed to compete.

What your customers will read about the Mazda2

Like the firm’s other new-era Skyactiv designs, it’s a car that feels like it’s been thoughtfully engineered by specialists rather than just created by a committee set on meeting generic targets. It’s this that gives it a bit of the MX-5 spirit; sure, it’s not quite the driver-focused sportscar the Mazda two-seater is, but there’s still plenty there to please enthusiasts without scaring off the core buyers. For this, and the way it looks, and the cut-above interior, it’s certainly worth spending the little extra it costs over those generic supermini alternatives.

Mazda is on a roll these days, with an impressive range of cars that are good to drive, stylish and practical. Those ingredients have now been distilled into the smallest model in the range – the Mazda2. The result is a success, giving big players like the Vauxhall Corsa and Ford Fiesta something to worry about.