A bad month for tech on the Mazda3 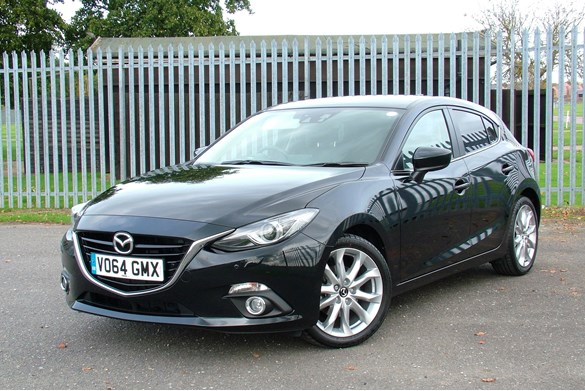 The Mazda3 experienced its most successful month in the UK in March, with 3,758 registrations.

We’ve been lucky enough to have it for nine months now, and the consensus is it is a very good car. April, however, was not the month for our 3.

Firstly, en route to the AM Aftersales Conference at the Heythrop Park Resort in Oxford, the Mazda3 didn’t recognise the postcode. Bearing in mind our Mazda3 is a new ‘64’ plate, we would have assumed its integrated maps would be up to date.

Then, driving in pretty steady traffic for a good portion of the A1 last week, we decided to really test the brains and technology of the car.

The Mazda3 features a display that helpfully indicates when you should change gear. It is intended to make your driving more efficient and works well  in normal conditions, but not quite so well in traffic. At 12mph, it indicated to change up from first gear to second, but it really couldn’t cope with the change at the steady pace, which meant staying in first gear until I was moving at about 15mph, leaving the engine sounding a little pushed.

However, all can be forgiven if reports are true about Mazda showcasing a Mazdaspeed3 hot-hatch model at this year’s Frankfurt Motor Show in September.

Ever since this version debuted last year, rumours have circulated over when the Mazdaspeed3 MPS hot-hatch will arrive; rivalling the eagerly-awaited Ford Focus RS, and Honda Civic Type R. Reports have now detailed that the concept is to debut in Frankfurt and will be powered by a new 2.5-litre turbocharged engine, delivering up to 295bhp. However, a Mazda spokesperson said: “There’s no news on any Mazda3 variants at the moment.”

Reports suggested that the production model of the Mazdaspeed3 is said to arrive at the same time as a refresh of the Mazda3 range, in 2017.