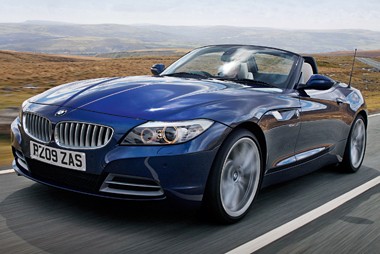 Market pressures have led BMW to adopt a folding hard-top for its new- generation Z4 roadster.

Mercedes-Benz has led the way with its SLK’s system for years, while rivals BMW, Audi and Porsche insisted the cloth-top had a future.

Now, according to BMW, the reassurance of a solid roof is one of the key customer demands in the premium roadster segment.

The UK is one of the largest markets in Europe for convertibles. Yet it seems owners’ paranoia about a cloth hood being a vandal-magnet has won.

New Z4, now built in Germany rather than the USA, has the SLK’s comforts firmly in its sights – unlike its predecessor, which was aimed at the Porsche Boxster’s performance-led ethos.

It’s difficult to argue against such a move when the SLK has outsold Z4 consistently. The aluminium roof accounts for only a 30kg weight increase in any case.

Such refocus will make Z4 more appealing to female motorists, who make up two out of every three SLK drivers in the UK.
One criticism of the outgoing model was its firm ride.

Dynamic drive control, standard on the new Z4, allows the driver to adjust the suspension’s firmness depending on their immediate desire for dynamism or comfort.

The roadster is longer and wider than its predecessor, which gives it more space for the occupants and their belongings.

Although the two-piece aluminium roof folds quickly and neatly into the boot, it still allows for 180 litres of load capacity.

With the roof up, the boot will take 310 litres, significantly more than the SLK, TT and old Z4.

Buyers can also specify a through-loading option which allows skis or golf clubs to be placed through a hatch between the seats.

Further storage is offered behind the seats, in the 10-litre glovebox and in a variety of trays and pockets.

BMW has no plans to offer a four-cylinder engined two-seater, as it did with the previous model, because it wants Z4 to be positioned clearly as a six-cylinder sports car.

The entry derivative in the new range is the sDrive23i, powered by a 2.5-litre engine which provides it with sufficient urgency.

Changes to the Z4 have given it broader appeal. It still provides a fun wind-in-the-hair driving experience, but its style, practicality and comforts will ensure more success with prospective customers.

The SLK, Audi TT and Porsche Boxster are key opposition for this car. BMW’s own market research found one key reason for selecting the SLK over the previous BMW Z4 was the added benefit of a folding metal roof.

The majority of buyers in this segment also craved a degree more comfort and practicality.

The designers and engineers of the new BMW Z4 took these considerations on board so the BMW Z4 should now appeal to a broader church, while at the same time not diluting the range’s excellent driving dynamics.

The Independent
This BMW is a softer, larger, less sporty, more luxurious sort of roadster than the original Z4, and closer to the Mercedes-Benz SLK in character.

Car magazine
It’s perfectly judged for its intended clientele – refined, eye-catching, an event to drive, very well made – and the folding roof is good, despite a few niggles.

MSN Cars
That hard-top roof and roomier cabin mean you get all the refinement of the Mercedes but with more than a good dollop of BMW thrills.