Jaguar won rave reviews for its new XK, albeit with reservations over nose styling. With the soft-top version it now moves into a market dominated by Porsche and BMW.

Does it cut the mustard? The XK Convertible needs to pass three key tests: looks, performance and usability.

On looks, it’s a winner. Top down – in less than 18sec – its sleek body combines grace and poise with sufficient aggression to cause a stir around town; no rival comes close for turning heads.

That’s also due to the sound, a guttural warble specially developed by Jaguar engineers. It’s a thrill to listen to – sound ducting means it is channelled back into the car – and is a key selling point. This channelling, and triple layer roof with insulation section, also means wind noise is eliminated.

When it comes to performance, the sector leader on handling and driving excitement is the Porsche 911 cabriolet. The XK, however, provides sufficient excitement to be called a driver’s car, but it does it with a gentle chassis that offers far more comfort for longer journeys. It’s more grand tourer than out-and-out sports car.

The XK convertible is made from lightweight aluminium materials, which reduces weight, but has a 50% stiffened bodyshell to minimize flex caused by the chopped top. A lighter car means better acceleration, although it does suffer from high gearing which, when combined with the peak power output at 6,000rpm, means a heavy right foot is needed.

So the XK hits the mark on looks and performance, what about usability? It’s a convertible, so it will never be the most functional of cars. Boot space is acceptable; the rear seat space is not.

Pointless doesn’t get near – Jaguar may as well do away with the 2+2 pretence altogether.

Priced a touch under £65,000, the XK convertible matches the 911 but is more than £6,000 over than BMW’s 650i. It comes loaded with equipment, such as keyless start, bi-xenon headlights, sat-nav, cruise control, parking sensors and electronic parking brake, which improves the deal.

Looks, performance and usability: the XK convertible is a compelling argument in two of the three. And for customers that do not need rear seats, it ticks all the boxes. 704 have been sold YTD. 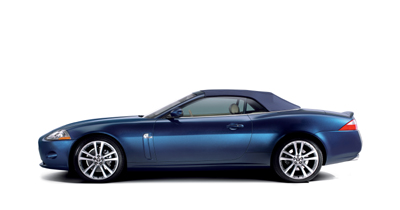