The M5 is the undisputed king of the performance saloon market. While Audi and Mercedes-Benz produce some amazing cars, there is a special kudos that shrouds the M5 moniker, earning it huge respect from potential buyers.

So the Alpina B5 may seem pointless. How do you out-M5 an M5? You don’t. Because the two are in fact very different beasts. Looking at the performance statistics they may seem similar: both have almost identical bhp and the same 0-62mph times, but the B5 carries out the task in a more relaxed manner.

Both have incredible pace but the raw power of the Alpina is combined with a more comfort-oriented set up. The suspension is softer, steering lighter and it has a six-speed automatic gearbox instead of the M5’s seven-speed SMG system, while the paddle shift is replaced by buttons on the back of the steering wheel. 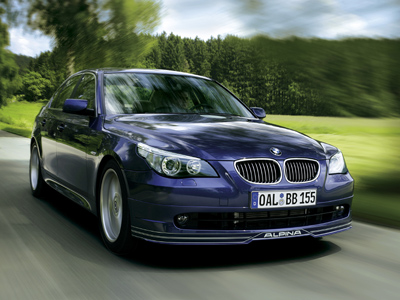 Then there’s the newly developed V8, in essence a supercharged version of the motor used in the 7-series, but with Alpina’s own internal components. It’s throaty compared with the high- revving, rocket-whining M5 V10. The B5 also has astonishing pace and there is instant response from low revs, with the engine happy to red-line without feeling stretched.

Thanks to the six-speed ’box, gear changes are super smooth but the manual shift allows true enjoyment, especially on tight twisting roads where, despite weighing the best part of two tonnes, the Alpina is both nimble and surefooted.

It’s a great long distance car, too, with good ride quality thanks to the softer suspension. It’s an ideal car to eat up the motorway miles.

Alpina markets itself as a ‘manufacturer of exclusive automobiles’ and that is certainly what you get with the B5. The looks may not be as aggressive as the M5 but they are certainly more distinguishable and with only 53 produced for the UK last year – 50 saloons and three Touring models – it’s certainly a car that ensures exclusivity.