If Jaguar made more cars like the XKR perhaps it wouldn’t be in as much financial trouble.

The XK8 series of coupes and convertibles evoke the true passion of the brand – unlike the X-type, which although a good enough car, doesn’t have the same brand perception or an obvious lineage back to the early days.

The XKR is all about two things: style and power. It looks fantastic – all sleek, rakish aerodynamics with the exacerbated shark’s nose in profile. Equally, it performs with stunning poise. The 4.2-litre V8 engine delivers 400bhp and 408lb-ft torque, good enough for a 0-62mph sprint of 5.4 seconds but, more importantly, brutal mid-range acceleration, aided by the six-speed ZF automatic transmission.

And it’s all manageable: power down and it still feels like you are controlling the car, rather than the other way round with some of the XKR’s rivals. That’s thanks to the excellent suspension, which although quite firm, doesn’t crash over potholes.

That tricky combination of good handling and superior refinement is provided by mounting the front and rear suspension on isolated subframes, and through using a lightweight aluminium front crossbeam which has hydraulic mounts separating it from the engine.

The one downside is that this car also fits with another Jaguar trait, a lack of room. To suggest it’s a 2+2 is to offer insult to mathmaticians: the only way to fit the ‘plus’ two in the back is if they are contortionists – and this is a car that’s 4,760mm in length, with a 2,588mm wheelbase. Jaguar insiders suggest the next generation version of this car, an all-aluminium model due early 2006, will offer significantly more leg and head room.

We’ve been unable to extract from Jaguar just how many XK8s and XKRs it expects to sell. We assume the numbers are small, but it will attract many people to the marque who won’t be in the market for a £50k-plus car – retailers need to draw the correlation with other models in the line-up. 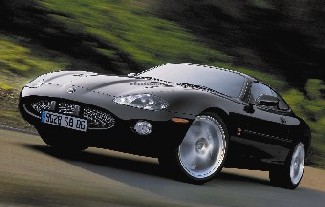