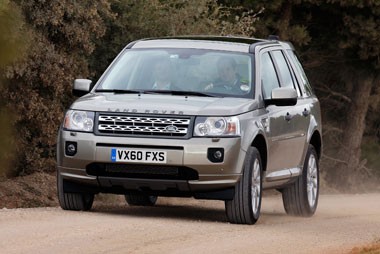 Land Rover has spent decades upholding its core value of 4x4 go-anywhere products. But it is now seen as an alternative premium choice for business executives and the rural middle-classes.

Its focus on business customers, and its need to be seen to be more green, is surely behind its first ever two-wheel drive offering – the Freelander 2 eD4.

Launched earlier this year, this derivative puts all the power from the 2.2-litre diesel engine to the front wheels, rather than to all four like the standard Freelander.

It also has start-stop as standard, and weighs 75kg less overall.

The result is better fuel economy and lower CO2 emissions – 47.2mpg as opposed to 45.6mpg and 158g/km compared with 165g/km from the usual 4x4 Freelander.

That drop in emissions brings it down a band into the 25% benefit-in-kind taxation rate, so helps to make it more financially attractive to user-choosers.

It’s more the lifestyle SUV choice, and one in four SUVs sold in Europe are now 2WD. Nevertheless, this model shouldn’t be restricted much by its lack of 4x4 drivetrain, as it can still clear obstacles up to 21cm high and has a wading depth of 50cm.

It also still has the capability of towing a two-tonne braked trailer, which is something a similarly priced BMW 3 Series cannot boast.

In top-spec HSE form, it certainly delivers a premium feel too and has a chunky, modern style that appeals.

It boasts plenty of kit, including 18in alloys, leather-trimmed powered seats, touch-screen sat-nav, six-disc CD-player with DAB radio and a panoramic sunroof.

The only thing a premium-segment customer might miss with this vehicle is that no automatic gearbox is offered. It would compromise the CO2 reduction achieved.

Thankfully, the six-speed manual ‘box is smooth and user-friendly.

In the wake of Evoque’s sales conquests it could be overlooked that Land Rover has long been selling superb premium vehicles.