Lexus has been issuing superlatives with its SC430 luxury coupe since it was launched in the UK in the summer of 2001 – many of them deserved.

It’s very quick, exceptionally well screwed together, nicely appointed and relatively exclusive (480 were registered here in 2002, 376 last year and about the same number is expected for 2004).

Compared spec for spec with a 645Ci, an SL350 or a XK8 (as most dealers will be inclined to do) the SC430 is a few thousand pounds less expens-ive. But it has never had the driving dynamics of most perceived rivals. In the brand’s relentless pursuit of perfection, the two-plus-two had its suspension retuned last year; now it has been further revised for the 2005 model year with new monotube shock absorbers to help stiffen the ride, improve response and reduce body roll.

Engineers and test drivers will notice the difference, but few customers will: despite its sports car pretentions the SC430 is not an object to be thrown around lightly and is not bought as such. This is a comfortable open/closed tourer that can put on a turn of speed if absolutely necessary. 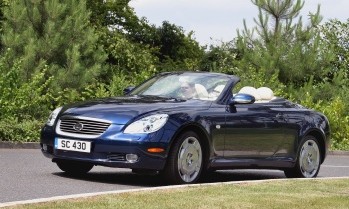