This tester first reviewed the L200 when the 4Life was launched in 1998. Lasting impressions were that it was rather good – but that it needed a lot more equines under the bonnet.

Years later, the Animal returns with a new look.

Performance has increased from the 4Life’s 113bhp to 137bhp and, boy, can you tell. Whereas overtaking used to be restricted to downhill, long stretches of straight road, coupled with a strong back wind, the Animal weaves in and out of traffic, bearing down impressively on learner drivers and old dears. However, a kerb weight of 3,892lbs (1,765kg) is still a fair old lump for 2.5-litres to move around.

The Animal’s looks are its strongest feature. Aptly named, it sits menacingly on the road, or even on your drive – a vehicle equivalent of the dobermann.

But the biggest change is the interior. The Animal Double Cab boasts, according to Mitsubishi, more standard equipment than any other pick-up on the market. The most striking feature is the new seats: distinctive two-tone leather with the animal logo tattooed prominently.

On the test car there is even a roof-mounted DVD system, which plays CDs, most MP3 discs, MPEG video, JPEG and BMP images, as well as the obvious DVDs. This little toy costs £840, excluding VAT and fitting.

This is where Mitsubishi dealers can relax while others need to work – although they are coming under a bit more pressure from the new Nissan Navara. The inside of the L200 combines ruggedness with style.

Although the seats are a little too firm and still manage to be a bit bench-like, there is no disputing that they attract the eye and the leather is a magnet for those wanting to combine business with pleasure. And, although the rear is a little cramped, the optional DVD is enough to prevent young passengers from complaining too much.

Independent double wishbone suspension with telescopic shocks on the rear gives the Animal a supple, if a little hard, ride. This, obviously, improves when the vehicle is carrying a load. Braked trailer towing capacity is 2.7 tonnes. 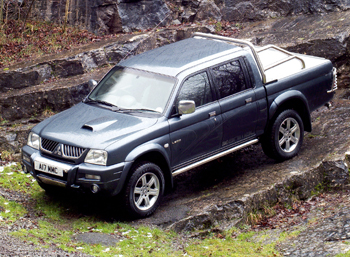