Proton’s dealers have been armed with deposit contribution incentives of up to £1,250 to help nudge three products, Gen-2, Impian and Jumbuck further up retail buyers’ lists. The initiative produced a 26.55% increase in sales in September to 367 units (2003: 290), aided by the first batch of Gen-2s, the replacement for the Wira.

Year on year, total Proton UK sales are up by 10% to just under 2,000 with an estimate of 2,800 by year-end. The target for 2005 is 4,000 registrations, and Gen-2 will be expected to play a significant role in what Proton Cars (UK) sales and marketing general manager Simon Park describes as “the challenge to reinvigorate the brand in the UK and attract fresh customers through a new generation of vehicles”.

He has his work cut out. Neither the medium sector Impian nor the quirky Jumbuck utility vehicle have set the value-for-money world on fire and on the evidence of the lower medium GLS spec Gen-2 we tested, there are issues that need to be attended to on the Kuala Lumpur newcomer.

The five-door hatch looks the part and, with ride and suspension tweaked by Lotus (which also had a hand in developing Gen-2’s 1.6-litre 110bhp Campro petrol engine), it handles sportily. Road and wind noise are bearable.

After mentioning that the entire offside rear door rubber seal was hanging loose, Proton explained that our test car was one of the first shipped over and that those sorts of problems (including the alarm being set off by the wind) were unlikely to re-occur. The ‘Angel Blue’ paintjob you see above is loved in Malaysia.

A 1.3-litre petrol engine will be offered in the new year, but no diesel engine is on the cards. It seems that Proton has not learnt from the Impian’s poor sales – it’s basically a sound car but one that is priced too high. Gen-2 entry is £8,995: dealers will have to work incentives and squeeze their margins if they are to sell in any quantity. 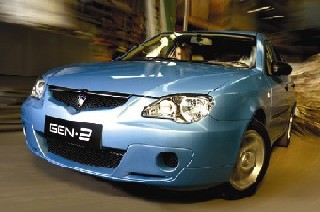