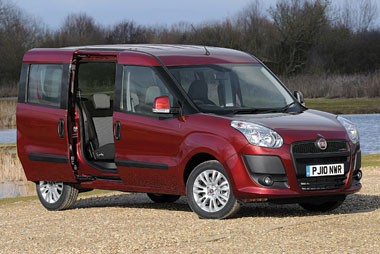 Fiat believes its new Doblo is set to rival traditional MPVs, thanks to the level of technology it offers, combined with a cheaper price tag.

There are eight versions and customers can choose from a 1.4-litre petrol engine, a 1.6-litre diesel (expected to be the top seller) or 2.0-litre diesel.

The outgoing Doblo has sold more than a million variants since 2000, with around 2,500 units sold in the UK last year. Fiat expects to exceed last year’s sales with the new Doblo.

Fiat hopes sponsorship deals with the British Cycling Federation and FA will improve awareness of the Doblo and increase showroom footfall.

One of the major changes in the new model is that it is no longer van-derived. Instead it takes its under-pinnings from the Punto Evo.

Styling is much improved compared to the outgoing model, but its appearance is still likely to divide opinion.

Class-leading space is one of the key attractions. A longer wheelbase means there is more room for passengers and luggage.

There is a 790-litre boot, which extends to 3,200 litres with the rear seats folded flat.

Dealers have the option to sell an extra row of seats for £800. This takes the number of seats to seven, although boot space is severely compromised.

There are plenty of other options, including parking sensors and Blue&Me TomTom.

The Doblo also comes with Fiat’s free eco:Drive technology, which ranks a driver’s eco-driving ability and gives advice on how to improve.

Fiat claims it can boost fuel economy by up to 15%. Also standard is Start&Stop and a gearshift indicator.

On the safety front, a major plus is that every model features ESP, which isn’t the case with rivals in this class.

Fiat also points out that insurance has dropped four groups resulting in a 50% saving on premiums.

Behind the wheel, the cabin feels spacious and there is great visibility, with a deep windscreen.

On the road, handling is good and there isn’t much body roll.

But the 1.6-litre MultiJet diesel engine is noisy at low speeds and takes around 13 seconds to get from 0-62mph.

Fiat looks to its new model to boost its share of the small car market.