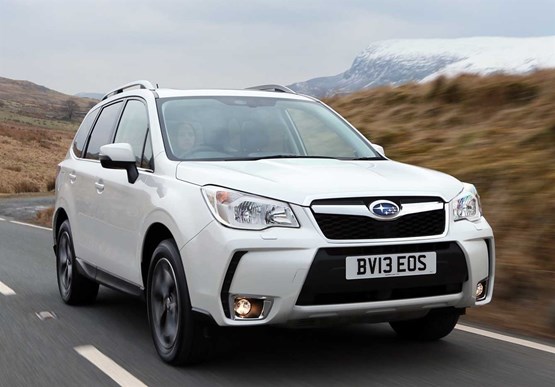 Subaru is hoping the launch of the fourth-generation Forester will help to kick-start its revival in the UK following years of decline as a franchise.

The Japanese government’s decision to weaken the yen to boost exports means Subaru UK parent company IM Group can start importing higher volumes, with a better profit opportunity for dealers. Subaru was unable to correctly price its XV crossover model in particular, due to the price of getting the cars to the UK.

However, Paul Tunnicliffe, Subaru UK managing director, believes the brand has seen its darkest days and  that the new Forester signals the franchise is back in business. Its addition will help volumes recover to 2,500 units this year, still a long way off the 10,000 registrations a year Subaru saw in the Impreza’s heyday.

The new Forester is an evolutionary rather than revolutionary product – Subaru is targeting existing customers to change to the new model, attracted by improvements in efficiency, space and pricing.

Subaru is now an all-wheel drive SUV brand in the UK and the Forester is a perfect representation of what it stands for.

Customers are loyal and stay with the brand due to the strength of the relationship with their local dealer and because they know the Forester is a fit-for-purpose off-road lifestyle vehicle. Subaru’s new X-mode off-road technology works seamlessly on muddy ruts and the 2.0-litre Boxer diesel and petrol engines are capable enough, with lots of torque on the diesel specifically. The 238bhp 2.0-litre petrol XT offers very swift acceleration for those looking for a turbo SUV.

The Forester is being positioned as the perfect vehicle for towing horse boxes or caravans and on the top-of-the-range XT trim an electronically powered tailgate can be opened and closed by a button in the cabin. There won’t be many surprises for existing owners when stepping inside the car. Outside styling hasn’t changed radically from the previous model, but the new car is longer, taller and wider and there’s a lot of space in the cabin, with ample legroom front and back.

Luggage space in the back matches the Mazda CX-5 at 505 litres, but is not quite as generous as the Honda CR-V, with its slightly more practical 589 litres of room.

Like previous Subarus, there’s a mixture of plastics on show, but it all feels well nailed down. The entry-level X trim comes with 17-inch alloy wheels, a CD player, Bluetooth, USB connectivity, air-conditioning, heated front seats and hill start assist. It’s quite a comprehensive specification list at £25,495, but it doesn’t stand up to the CX-5 or CR-V for style or build quality, which are both cheaper, by £2,200 and £785 respectively for the equivalent diesel model.

The biggest-selling diesel isn’t competitive on efficiency at 49.6mpg and 150g/km CO2 compared with  61.4mpg and 119g/km CO2 for Mazda’s 2.2-litre Skyactiv diesel in the CX-5. This new Forester won’t turn existing buyers off but it’s unlikely to pull in conquest business from rival brands.

Subaru is happy carving out its niche in the UK but its market share is consistently being eroded by capable alternatives.

What others have said about the Subaru Forester

Telegraph
As ever, the Forester won’t be on a huge number of SUV buyers’ radars – it simply doesn’t have the image or wow factor. Subaru fans will love it, however, and it might just entice a few newcomers.

Autocar
Fresh styling might attract new buyers, but more likely the hardy faithful will be pleased with the Forester’s incremental improvements.

Based on Daihatsu’s Sirion, the revamped Subaru Justy gives dealers a supermini to offer entry-level customers at a time when drivers are downsizing and watching their budgets.