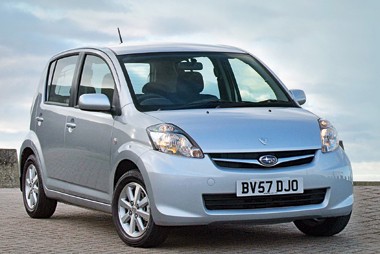 Based on Daihatsu’s Sirion, the revamped Subaru Justy gives dealers a supermini to offer entry-level customers at a time when drivers are downsizing and watching their budgets.

Subaru’s version will be limited to just 6,000 units a year throughout the whole of Europe, and UK dealers will get only 1,000 examples.

The Justy offers sedate styling on the inside and out, but customers aren’t looking for a car that’s going to give them street cred.

The front-wheel drive Justy’s 1.0-litre petrol engine is the same three-cylinder unit that’s in the Sirion and Toyota’s Yaris and Aygo, Citroën C1 and Peugeot 107.

While there’s not much hope of squeezing any sporty performance from this little engine, it does deliver low running costs.

It emits only 118g/km of carbon dioxide which means customers only have to spend £35 for their road fund licence each year and it will do 56.5mpg if driven with a light foot.

Handling is nimble enough for driving around the city, but a long-distance journey could get tiresome due to the engine struggling at motorway speeds.

Standard safety kit includes what drivers expect – ABS with EBD, driver, passenger, side and four curtain airbags, but there are also added extras like rear parking sensors and an auxiliary input socket for MP3 players.

Throw in Subaru’s standard five-year/60,000-mile warranty with European roadside assistance, and customers are looking at a potential option for a family runabout.

However, customers looking for an affordable small car can also get a lot of what the Justy is offering in the rival Kia Picanto which severely undercuts the Justy with a price of £6,095 for the entry model.