When so many supposedly volume brands say they’re now chasing premium car customers, it must be an unenviable task to launch a premium brand from scratch in the UK.

This is what Infiniti will do in April 2009.

Nissan’s up-market arm has seen success in North America (and over the last couple of years has been launched in the Far East) and, like Lexus has done for Toyota in the UK, Infiniti models will be offered at a selection of stand-alone outlets next year.

Infiniti’s FX will rival the BMW X5/X6 and Porsche Cayenne, the EX will take on the BMW X3, while its G37 saloon and G37 coupé will have their sights on the top six-cylinder models in the BMW 3 series range.

Infiniti is currently negotiating with a small number of dealer groups ahead of its introduction in the UK but the network will remain small, with outlets concentrated in the main metropolitan areas of the UK.

Given the lack of a diesel engine until 2010, the first year of sales will be modest, but this has been factored into the business plan.

In the UK, the G line-up is likely to be most popular given its accessibility and with a new 3.7-litre V6 petrol engine it should have the measure of BMW’s twin-turbo 3.0-litre – at least on performance.

Infiniti is taking the job seriously, and has endowed the G models with the driving dynamics and technology expected of the very best.

The G cars use the same platform as the Nissan 350Z, so with the engine mounted behind the front axle to aid weight distribution, both the coupé and saloon feel taut and agile on the road.

Interior quality is up with the best in class, with hand-stitched leather and expensive looking fittings.

The coupé has more of a 2+2 seating arrangement than cars like the 3-series Coupé and Audi S5. 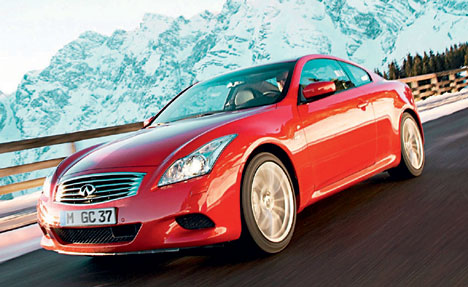 Automatic transmission will have seven gears, satellite navigation will be hard drive-based with a touch-screen display and rear lights are LED.

UK models will come with 18-inch wheels as standard and only a few items will be restricted to the options list.

Infiniti, the premium marque owned by Nissan, comes to the UK next summer. Its focus is on establishing itself as a performance brand and, as such, one of its key products will be the FX.