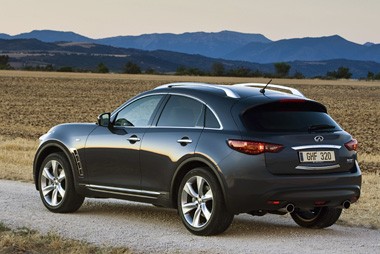 Infiniti, the premium marque owned by Nissan, comes to the UK next summer. Its focus is on establishing itself as a performance brand and, as such, one of its key products will be the FX.

Pitched as a rival to the Range Rover Sport and BMW X6, the FX has been designed as a fusion of SUV and sports car.

The elevated stance gives it SUV-like presence, while the tapering roofline and long bonnet emphasises its performance.

It will fight its competition hard on the looks front, thanks to its double-arch grille, side vents, slanted headlamps and bulging front wings giving it a distinct image.

The distinctive design carries over to the inside, with gentle curving lines complemented by occasional prominent bulges, a nice Infiniti-branded analogue clock, and cleverly laid out buttons.

The quality and feel is on a par with its rivals.

There are two engine variants, both petrol-powered and coupled to a seven-speed auto gearbox with manual shift paddles.

The 3.7-litre V6 found in the FX37 populates all UK-bound Infiniti products and will be used in the forthcoming Nissan 370Z coupé, while the flagship FX50 boasts a powerful 5.0-litre V8.

Neither variant will earn their buyers praise from the environmental brigade, as their CO2 emissions are pretty startling, but their noise and power will keep owners smiling.

Infiniti has made use of aluminium door panels and a lightweight high-strength steel subframe to keep its weight to just above two tonnes.

That’s a good thing, because the FX comes loaded to the roofline with technology and equipment.

One innovation is the use of ‘scratch shield’ paint which, Infiniti claims, displays five times fewer scratches than normal paint and when exposed to heat actually repairs fine scratches.

FX will not appeal to all, but in this segment its rarity and individuality will win it sales.

It’s under no great pressure, at least initially. Infiniti says the focus is on establishing the brand, not achieving volumes. UK sales will be “in the hundreds” with FX accounting for around 35% of the total.

The FX likes to hustle along, whether there’s a V6 or V8 under its bonnet.

Both engines provide plenty of torque to easily haul its two tonnes of bulk along, and give it a licence-losing turn of speed.

The transmission doesn’t live up to the job however, as in auto mode it’s slightly jerky and the paddle-shifts mounted behind the steering wheel are uncomfortable to use manually.

On twisting roads the all-wheel drive transmission and active damping control (except on the entry FX37GT) means there’s a good level of grip, so while the body rolls and the tyres protest a bit during fast cornering, the car remains secure and stable.

In fact, its intelligent electromagnetic torque transfer allows an element of oversteer for enthusiastic drivers.