The second generation Lexus IS saloon has a big job on its hands as it looks to truly rival the offerings of the three German prestige manufacturers. It is also an important part of the Japanese carmaker’s aims to increase total sales in the UK market.

Lexus has built on the strengths of the first generation IS, such as its reliability, refinement and handling, to create a car that oozes class. From the moment you open the door it’s obvious that both build quality and perceived quality are exceptionally high, and inside the cabin the fit and finish is superb. Details such as the ‘invisible’ seam stitching on the leather upholstery and carefully matched wood trim sections add a further element of luxury.

The styling may not be to everyone’s taste, particularly the chunky and rather stunted rear, but the sporty and sharp lines give it a real air of dynamism and help it to stand out from the rest of the executive market.

It is certainly a noticeable step forward compared to its predecessor, which is starting to show its age. The modern exterior design is echoed by the cabin and instrument cluster, which is clean and unfussy, although some of the interior wood options are still a little on the old-fashioned side.

The body of the new IS is longer, wider and stiffer than its predecessor with a wider track.

The original IS has been around for seven years now and although it was a credible alternative in the class, it was never quite as good the competition. Plus, without a diesel option, it struggled in the important fleet sector.

With the addition of a new all-aluminium four-cylinder 2.2-litre diesel engine, which Lexus expects to outsell the petrol engine by two to one, it’s obvious the manufacturer is getting very serious about the company car market.

That’s also why the car has been developed to be less expensive to repair than rivals, and also cheaper to insure. This will be good news for retailers, particularly when it comes to convincing buyers of the merits of buying an IS as oppose to a C-class or 3-series.

The IS is available in standard, SE, SE-L and Sport variants (the IS220d Sport is not due until April). Standard equipment levels are good with eight airbags, cruise control, six-disc CD changer, climate control, alloy wheels, front and rear armrests along with keyless entry and push-button start. The Sport models get larger 18in alloys, lowered sport suspension and sport-style pedals.

Compared to its rivals, Lexus certainly has the edge when it comes to competitive pricing and specification levels. The IS250 SE manual is priced at £25,400, whereas a BMW 325i SE with similar equipment costs £4,000 more and a Mercedes-Benz C230 Classic SE is £4,615 more expensive.

Lexus is aiming to sell 7,400 units this year and believes that the strong appeal of the car, along with the availability of a diesel engine, will attract new buyers to the brand. It expects 70% of sales this year to be conquest sales from other premium makes.

The new IS is certainly the biggest ever threat to the stranglehold that BMW, Audi and Merc hold over the premium D-sector.

The IS handles superbly with precise and well-weighted steering, while it’s sophisticated traction and stability control systems mean that even in slippery conditions, the rear-wheel drive Lexus always behaves itself. Ride is cossetingly smooth, as you’d expect, and with barely any wind, road or engine noise, long distance journeys are a delight.

The new 2.2-litre engine is Lexus’s first diesel and it’s very refined and smooth. However, it is better suited to an automatic gearbox due to the narrow power band. Unfortunately, there is no auto option and the standard diesel engine has a gearbox that feels too high geared in fifth and sixth.

The 2.5-litre petrol engine is smooth and is available with a manual or automatic gearbox, both of which suit the car well. The V6 engine is incredibly refined and quiet, although it needs to be revved to get the best performance. 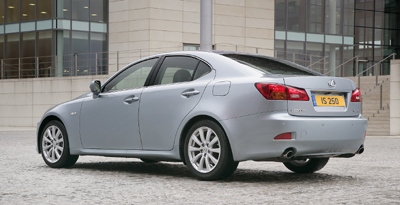