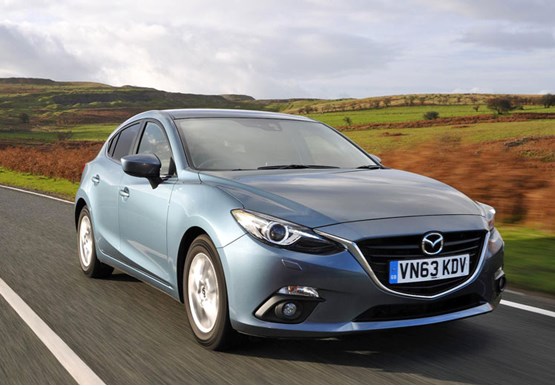 The arrival of the CX-5 and Skyactiv kick-started Mazda’s recovery in the UK and the new Mazda3 will be essential to continue its momentum.

Mazda’s UK registrations have dropped by 48% since the recession, from 50,947 units in 2007 to 26,183 in 2012, but the brand is now moving in the right direction, with a refreshed product line-up and competitive engines.

The UK C-segment is fiercely contested and Mazda’s marketing team will need to work hard to get the Mazda3 on customers’ consideration lists, which also feature cars such as the Volkswagen Golf, Ford Focus and Kia Cee’d. The 3 needs to be a success to help Mazda’s UK network improve average return on sales (currently 1.7%) and get enough cars going through the network to satisfy dealer workshops.

Mazda sales director Peter Allibon predicts average new car sales through each dealership will “quickly return to pre-crisis level” with the help of the Mazda3, as total annual volume approaches 40,000 units, of which 70% will be Skyactiv models.

If dealers can get customers in for a test drive, they will be impressed by the styling, which carries through the design cues seen on the Mazda6 and CX-5.

The new model will be offered as a hatch and a fastback and both have good kerb appeal. That sleek roof-line does mean there’s a slight sacrifice on headroom and the proportions mean the boot doesn’t offer quite as much space as a Golf (340 litres in comparison to the VW’s 380 litres), but it’s still better than a Focus (316 litres).

Customers will welcome the higher-quality interior, which features better-quality materials,  an area in which Mazda has been criticised in the past. Certain design cues look like they have been inspired by German premium brands such as BMW and Audi (a trend likely to continue following Mazda’s appointment of former BMW designer Kevin Rice as its creative director).

There are some neat technology features inside too, with drivers able to use apps on the MZD Connect media system through a smartphone link that unlocks access to digital radio, podcasts and social media. There’s also a heads-up display available on the top Sport Nav trim.

The new model has also been given a five-star safety rating by Euro NCAP. For customers that want more safety technology, dealers can upsell a safety pack for £700 that includes rear vehicle monitoring, lane departure warning system and high beam control.

Mazda will continue to offer “right-sized” engines rather than introducing low capacity engines such as Ford’s 1.0-litre Ecoboost.

That doesn’t mean Mazda can’t compete in terms of efficiency. The diesel offers 72.4mpg and CO2 emissions of 104g/km, which is impressive from such a torquey and powerful engine.

The Mazda3’s price point at £16,695 with a decent level of standard equipment, its inclusion in the shortlist for European Car of the Year, strong styling and engines will satisfy existing customers and should attract customers from rival brands.

Its blend of brisk performance and energetic handling will be deal-clinchers for Mazda regulars who like to get a bit more but pay a bit less, and those buyers will be delighted with the economy, practicality and style also on offer.

There’s very little that does detract from the Mazda 3’s package. Sure there are some minor flaws, but the 3 remains interesting to look at, great to drive, impressively well-equipped and seriously cheap to run as a company car too.

The new Mazda 3 is a very decent car and worthy of a place on the shortlist of anyone in the market for a Golf-sized hatchback. It’s stylish, good to drive, cheap to buy and run, and even reasonably practical.