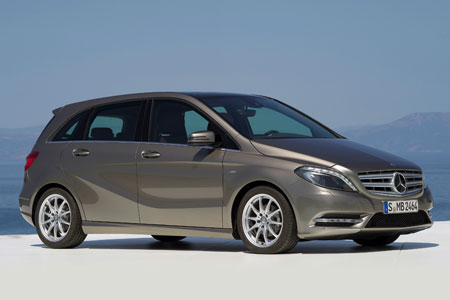 The new B-Class marks the start of Mercedes’ transformation into a brand that can compete for younger customers against Audi and BMW.

The styling and small family demographic of the B-Class might not strike most as an obvious starting point, but Mercedes has developed new engines, transmissions and a new platform which will be shared by more youth orientated models to come.

The second-generation model will look to capture existing B-Class and A-Class customers and Mercedes will be looking to sell 7,500 units in its first year of sales.

The German brand believes the new B-Class is a “significantly younger package” and while the exterior design is definitely a step forward, it’s still not going to turn heads.

However, the interior space has been spruced up and a particularly neat feature is a tablet-style centre console which looks like a mini-version of an Apple iPad.

As is the case with many new cars, the B-Class can connect to the internet via a smartphone and features apps like Facebook and Twitter for customers that need to update their status on the move.

It’s roomy on the inside too and a flexible seating system called Easy Vario Plus can be added as a £600 option.

Mercedes was keen to boast about the B-Class achieving a best-in-class drag coefficient, but it’s a detail that will pass over most customers’ heads. What they will be interested in is the effect it’s had on fuel economy.

Emissions have also been cut to 114g/km on the entry diesel, which means nothing to pay in VED for its first year on the road and £30 after that.

The entry level diesel is quite slow, but it’s capable enough for the target customer.

The higher powered 1.8-litre offers that extra bit of oomph to make driving the B-Class a bit more enjoyable.

The 120bhp petrol is actually quite peppy, pulling well at low revs, but needs working hard when overtaking on the motorway.

Mercedes isn’t known for its manual gearboxes, but the new six-speed is decent and a new dual-clutch seven speed automatic is available for a £1,450 hike for those wanting to sit back while the car does the shifting.

One area that needs addressing before the car launches next March is the new suspension set-up.

It’s jittery on the motorway and is fairly brutal when absorbing bumps, particularly at the rear of the car.

Safety equipment is an important feature to highlight, with the B-Class featuring technology that would normally be found on larger executive models.

As a world first in the compact segment, the B-Class features a radar-based collision warning system with adaptive brake assist as standard.