First drive: Peugeot 2008 gets a grip on a growing market 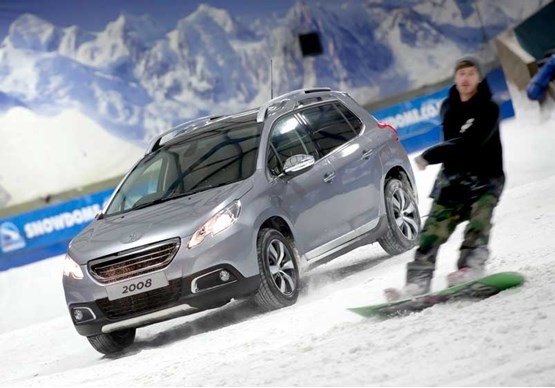 The market for B-segment SUVs or crossovers is one that many vehicle manufacturers are clawing to get into. It’s relatively small at present, but is expected to grow quickly as downsizing motorists seek something that still has style and useable space.

Nissan’s Juke and Skoda’s Yeti have largely had the sub-segment to themselves for a couple of years but are now having to fend off multiple new entrants. Ford’s EcoSport is on its way, and the Vauxhall Mokka, Chevrolet Trax and Renault Captur have all launched. Peugeot, too, has been keen not to be left behind and last month supported dealer launches of the 2008, the latest model in its range.

The 2008 is Peugeot’s compact crossover and shares much of the components and powertrains of the 208 range. For about £800 more than an equivalent 208, buyers get a more spacious bodyshell and, thanks to a higher stance, standard roof rails and slightly squared-off wheelarches, a hint of urban-friendly SUV about it. Peugeot UK’s  product planning and pricing manager Mark Blundell said the 2008 is well positioned to attract customers who want to downsize into a car that’s still stylish, well equipped and spacious – its boot is bigger than a Vauxhall Astra’s. He expects  the 2008 to bring non-Peugeot customers into the brand.

“It’s a real opportunity and something our dealers will be excited about,” he said. Full-year UK sales are expected to be at least 9,000 units.

Unlike the 208, which starts with a basic Access model that lacks even air-con, the 2008 range begins with Access+. All models have air-con and LED lights, cruise control, electric mirrors and steering wheel-mounted controls for the CD player. Customers who want alloy wheels will have to move up a grade to the Active trim, which also adds front foglamps, Bluetooth and digital radio and a multifunction colour touchscreen.

Drivetrain options comprise two petrol engines and three turbodiesels, two of which have stop-start systems which can keep CO2 emissions down to 98g/km (VED Band A) when combined with the EGC auto transmission. When coupled with Allure and Feline specifications, the larger engines also come with Peugeot’s ‘grip control’ system and all-weather tyres. During the media launch, these proved capable of letting me drive up and down the ski slope at Tamworth Snowdome. This superb feature is likely to be a key attraction for fleet customers, who’ll want the reassurance of knowing their employees can still work even in rough wintery conditions.

Dealers have a bunch of optional extras to sell, all reasonably priced, from sat-nav at £400 to park assist at £300 and metallic paint at £495.

Overall, the 2008 offers space and value plus it doesn’t look half as odd as the Nissan Juke, and thanks to grip control it has a crucial USP in an increasingly competitive marketplace.

What’s been said about the Peugeot 2008

The 2008 is a better all-rounder than the more dramatically styled Nissan Juke, but that’s faint praise indeed because the Juke also falls short in a number of key areas.

The Peugeot 2008 is a stylish rival to the Nissan Juke and Renault Captur – but it’s not that fun to drive.

A pleasant dog walking/station car with a comfortable and stylish cabin, space enough for four and luggage, and with the added bonus of surprisingly good ride and handling.

The raised stance and traction electronics will get you out of (most) snow trouble. Only the designer’s mother could love it, though.

It’s good value, refined and decent to drive – the Peugeot 2008 deserves its place among the hordes of compact crossovers roaming the school run.