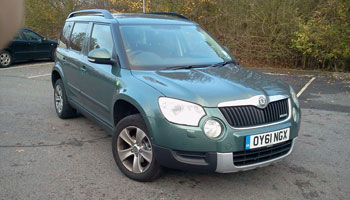 It is often quite easy to sit within the automotive industry and think you have an informed opinion about brands, but talking to friends and family can always reveal a closer indication of the truth.

Skoda is definitely gaining notoriety, with dealers helping to establish it in joint second place in the JD Power Survey with the previous 11-year rulers Lexus.

The Auto Express Driver Power survey also highlighted the Yeti as the best car to own in 2012.

Since running AM’s long term Yeti many people have been able to get up close and experience what Skoda is all about, but opening up opinion across Facebook and Twitter – important brand building arenas for modern marques – to people that don’t get to experience the models shows there is still some stigma attached to brand’s past.

Despite the majority of correspondence coming from people under 30, so relatively new to the car buying party, they were old enough to remember them as being a “source of ridicule”.

Interestingly there was no mention from the social network comments about the price or value of the vehicles.

Skoda has just launched its Citigo with a multi-million marketing campaign and it’s the first model to feature the new badge.

While the new city car’s design is largely dictated by the Volkswagen Up, the looks of the Yeti and other models in the range by chief of exterior design Jozef Kaba, are still missing that essential piece of the puzzle.

The Yeti drives well, it’s spacious and the 1.6-litre diesel is great and that seems to have come across through word of mouth, even with people that have never driven a Skoda, but is that enough to bring people to the brand if they have to accept a practical package without any “street cred”?

It will be interesting to see how ex-Bentley sales and marketing director and new Skoda brand director Alasdair Stewart will approach pushing the company forward.