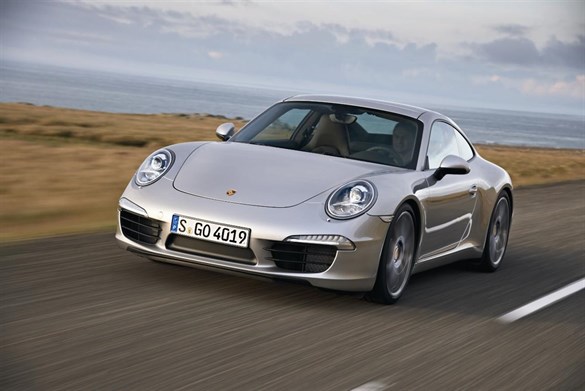 This new 911 has to live up to the ramped up expectation of being one of the best drivers’ cars of all time since its introduction in 1963 while adding enough new elements to keep things fresh.

In 2011, the 911 accounted for a quarter of Porsche UK sales, and it remains the biggest selling sports car in the brand’s range. According to the SMMT, sales were at a high of 3,066 units in 2007, but dropped down to 1,819 in 2009 and to their lowest in five years at 1,616 last year as customers waited for the next model.
Luckily, its sporting heritage and expertise have delivered in full, even on the entry-level Carrera, reflected by the fact 911 sales year-to-date have already surpassed last year’s number.

That iconic 911 silhouette and rear-mounted flat-six boxer engine remain intact, only this time Porsche has stripped out 45kg of weight to further improve driving dynamics.

This model is 100mm longer for greater interior space, there’s a slightly lower roof line and wider front track. There’s more cabin space, so much so that the front of the car feels like it stretches out in front of you.

There are some bucket seats in the back, which can just about squeeze in an adult passenger.

There’s a new high-resolution screen in the centre console and the satellite navigation pops up in one of the five round instruments above the steering wheel.

The 911 has electro-mechanical steering which delivers exactly what you want from a sports car. The wheel feels firm when turning hard into corners and movements feel meaty and connected to the road.

The 911 Carrera is powered by a new 3.4-litre engine developing 350bhp and while 194g/km of CO2 with the PDK transmission is still relatively high, Porsche has reduced emissions by 36g/km without affecting the driving enjoyment.

While the PDK automatic transmission is great, the seven-speed manual transmission fitted to this model also adds to that ultimate driver’s car feeling. Switching up into seventh means it is possible to cruise along and creep towards 31.4mpg. Stop-start also helps boost efficiency.

Launch off in first gear and the engine roars into action with a satisfyingly growl. The standard 911 Carrera will do 0-62mph in a pretty rapid 4.8 secs.

This car enjoys being grabbed by the scruff of the neck, but it’s perfectly useable too. The size of the front boot is just about large enough to fit in a weekly shop and it can be driven smoothly day-to-day, transforming into an sporty beast with a dab of the accelerator pedal if desired.

The new 911 is slightly faster in a straight line than the previous model and the addictive engine note can be enhanced with a ‘Sound Symposer’ that pipes the noise into the cabin. Ramping up through the gears instantly draws a smile and the 911 is extremely composed on tight corners.

The new generation 911 is one of the most enjoyable cars to drive on the road and improvements in efficiency and ride quality mean customers old and new will be pleased with a model that lives up to the legend.

What’s been said about the Porsche 911 Carrera

PARKERS
This is possibly the best Porsche 911 and is certainly one of the best driver’s cars of all time. All its improvements, along with excellent performance, make this 911 one
of the most engaging and entertaining cars around.

CAR MAGAZINE
It’s more refined, more comfortable, and more economical than ever before, but what really matters is that it still has that unique 911 feel and character.

TOP GEAR
All things considered – its price, its performance, its economy and emissions – it’s pretty clear we’re talking
about the world’s best sports car here. The 911 used to be
as much defined by its quirks and foibles as it was by its genius. Well, the foibles have gone. The genius is now more
ingenious than ever.

THE INDEPENDENT
While it is true you can get rear-wheel drive fun at half the price (Nissan 370z or Toyota GT86), nothing quite offers the sheer throttle-hoofing buzz of a 911.

AUTOCAR
Whichever engine you chose, and whether you go hard or drop-top, this is the car that not only sits at the top of the class, but covers pretty
much everything that the opposition can throw at it in every area.