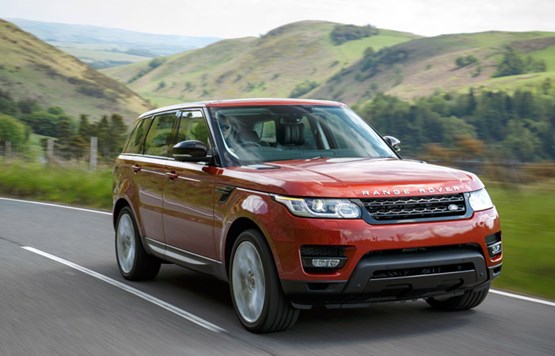 Land Rover gave the design and engineering teams a very simple brief for the next-generation Range Rover Sport: More Range Rover. More Sport. It’s easily dismissed as marketing speak, but they have developed an extremely versatile car that will strengthen Jaguar Land Rover’s position as the only non-German brand that is marching up the premium sales charts.

The new model has shed 420kg, which means better efficiency, but, more importantly with a car like this, the agility and power on offer are genuinely impressive.

The popular Evoque has heavily influenced the Sport’s design and while it is never going to shake that footballer image, customers can choose from a variety of colour combinations.

Engine choices include a 292bhp SDV6 turbodiesel, a 510bhp 5.0-litre supercharged petrol V8 engine or a 258bhp TDV6 model. There will also be a diesel hybrid that produces 169g/km of CO2, as well as a four-cylinder petrol.

The diesels will take the majority of sales in the UK, although getting a customer behind the wheel of the Supercharged V8 for a test drive would surely send conversion rates flying. The petrol will race from 0-62mph in just 5.3 seconds, emitting a satisfying roar as it does.

The V8 doesn’t quite match the 550bhp Porsche Cayenne Turbo S for raw power, but this is a Range Rover, it’s still thrilling to drive but it’s controlled and smooth.

The turbodiesel isn’t a poor substitute either, with an impressive amount of torque on offer – 442 lb-ft at 2,000 rpm. The TDV6 gives 38.7mpg and the SDV6 37.7mpg and both diesels offer below 200g/km CO2, which isn’t bad for a two-tonne performance car.

The Sport has electric power steering but the engineers have managed to crack the difficult nut of offering weighty feedback without it feeling synthetic. There is a bit of body roll on sharp corners due to the size of the car, but the multi-adjustable air suspension means it is always well controlled. The cabin is a comfortable place to be, with supportive leather seats,  and even at motorway speeds the lack of wind noise is impressive.

Off-road technology always sits at the core of the Land Rover brand and despite Range Rover’s status as the luxury spoke, the Sport is loaded with all the tech you would expect on a Discovery. Sales executives may have a job going into detail with the acronyms for all the off-road systems, but the Sport is as at home wading through rivers as it is sprinting up the motorway.

Prospective buyers can even pull out the practicality card when trying to convince the family with the option of two occasional seats in the back to make the Sport a seven-seater.

Land Rover has mixed performance, design and practicality without sacrificing the brand’s desirability to create what must be one of the most versatile cars on the market.

What’s been said about the Range Rover Sport

What Car?
While some similarly priced rivals are faster and more fun to drive, none is as comfortable or refined. The Sport is also more practical than most premium SUVs thanks to its wide and spacious cabin and the option of those extra two seats.

Auto Express
The Range Rover Sport is so impressive in this respect that it makes you wonder why you’d need to splash out an extra £20,000 to upgrade to the Range Rover.

Daily Telegraph
Fine-riding, dynamically able, unsurpassed by rivals off-road and a great deal better to drive than it has a right to be. You pay for it, though.

Fleet News
It would be a mistake to judge the Range Rover Sport as a result of any of its individual accomplishments, even if some of them are remarkable, because it’s the breadth of its abilities that makes it the new default option in its class.

The new Range Rover is entering a higher echelon of luxury than ever seen before in the 4x4 market.