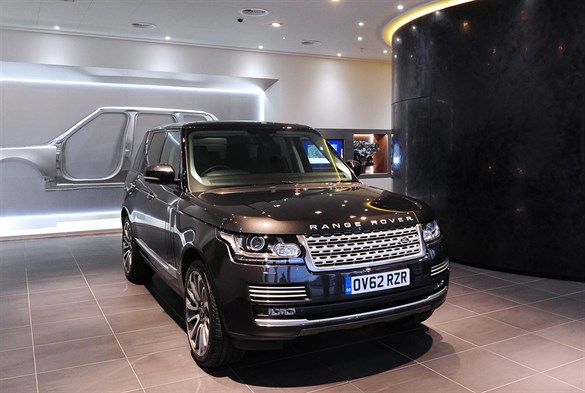 The new Range Rover is entering a higher echelon of luxury than ever seen before in the 4x4 market. Its maker, Land Rover, has put the likes of the Bentley Continental Flying Spur, Rolls-Royce Ghost and Maserati Quattroporte in its sights.

It’s a sensible strategy, because a proportion of Range Rover customers have at least one such luxury saloon already in their garage anyway.

And, as such, the price hike of around £15,000 over the outgoing model for the 4.4-litre TDV8-engined Range Rover will not be a huge concern for these customers.

That means making a big deal of the veneers, leathers and technology on offer with this car’s Vogue, Vogue SE and Autobiography trim levels, such as soft-close doors, four-zone climate control and optional rear executive class seating which swaps the three-person bench for two individual seats.

Yet the lion’s share of Range Rover orders are expected to be for the cheaper 3.0-litre TDV6. Priced from £71,295 in Vogue guise, it costs not much more than a Porsche Cayenne Hybrid or long-wheelbase Mercedes-Benz S-Class. It is slightly slower than both those rivals, but its acceleration is perfectly respectable for a luxuriously-appointed 4x4 that weighs more than two tonnes, that can traverse rutted, rocky terrain and that can tow a 3.5 tonne horsebox.

Buyers will be driving the most efficient Range Rover ever. Thanks to measures which have made it 420kg lighter than the old model and its Ford-sourced six-cylinder diesel with stop-start technology, its CO2 emissions are 196g/km and combined fuel economy is 37.7mpg.

That’s on a par with a four-year-old hybrid Lexus RX400h. It means this Range Rover is fitter for business as well as retail customers, and the carmaker expects its sales mix to include corporate sales to hotels and chauffeurs.

The decrease in weight, wider track and slightly lower roofline has ensured the new model’s on-road manners are much improved and there is less roll during cornering.

Its off-road ability remains best in class, with air suspension providing 296mm maximum ground clearance for extreme terrain, hill descent control and a wading depth of 90cm thanks to innovatively positioned air intakes. Its Terrain Response system, which owners of the previous model used to select the appropriate terrain, now has an automatic function whereby the car uses a myriad of sensors to optimise drive to the conditions.

This means that on the few occasions owners get into any sticky moments the car will do its best to help them out.

In today’s finance driven new car market, Land Rover is making the Range Rover as accessible as any rival. Customers picking its Freedom personal contract plan for the entry Vogue TDV6 can pay a £20,000 deposit or trade-in and then pay 35 monthly payments of £878 and the optional £29,905 final payment three years on if they want to keep the car.

I can’t see why they wouldn’t.

What's been said about the Range Rover:

One of the best luxury cars money can buy: this really is a bit of an all-round superstar.

It is a fantastic car. Not just the best off-roader in the world but one of the best cars full stop.

It’s hard to match the feelgood factor of wafting around in the new Range Rover. It’s quick, comfortable, classy and capable.

Land Rover gave the design and engineering teams a very simple brief for the next-generation Range Rover Sport: More Range Rover. More Sport. They have succeeded at both