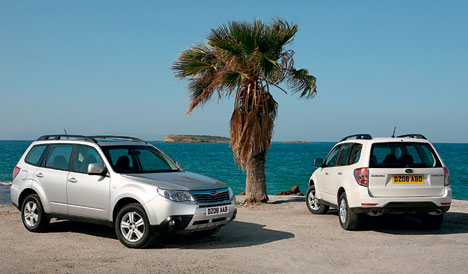 It has been a rocky start for the revitalisation of the Subaru range.

The company’s departure into hatchback territory with its Impreza was greeted by minimal fanfare from the press.

The Forester is built on the same platform as its hatchback sibling, so shares many of the design similarities at the front.

Its looks have shifted towards more of a truely chiselled SUV design in comparison to the estate-like model it replaces.

The new Forester will be rubbing up against some very competitive rivals with long-established models in the sector such as the Toyota RAV4 and Honda CR-V.

Lawrence Good, Subaru UK managing director, said dealers would be expected to sell the Forester without any discounts.

The onus will be on competitive pricing rather than cash-backs.

Dealers are expected to sell 4,000 Foresters in the first full year of sales, with 2,000 coming before the end of this year.

Good said Subaru was investing more money on marketing and promoting the Forester to the right audiences. There would be a particular push for equestrian sports.

This should help to get the product in front of the right audience and drive footfall to showrooms.

The redesign brings a closer synergy between models.

This can be seen with the redesign of the Forester’s big brother, the Tribeca.

There’s just one 2.0-litre petrol engine and two trims (X and XS) for customers to choose from at the moment, but Subaru’s new 2.2-litre diesel engine is expected in September.

Subaru dealers finally have the diesel option available for their customers on the Outback and Legacy and a full model range, all with diesel variants, isn’t far away.

The four-speed automatic transmission is available for a £1,000 premium on the Forester and is also expected to be the biggest seller.

The 2.0-litre engine can also be specified with a five-speed manual gearbox.

There’s a good level of standard specification, including MP3 player connectivity on the stereo, hillstart assist and a big “moonroof” that lets lots of natural light into the cabin.

Despite all the safety equipment, Subaru won’t be going for a Euro NCAP safety rating.

Subaru engineers said Forester had been designed to meet global specifications and with an emphasis on driving enjoyment rather than on the safety levels required from a family audience.

Dealers had better hope that customers aren’t sceptical about its safety.