While Renault can claim to have invented the compact MPV sector with the Scenic back in 1997, it was Vauxhall who really perfected the formula of a top selling people carrier.

It’s not difficult to work out why the first generation Zafira was so popular among both retail and fleet buyers. The combination of affordability and practicality helped sales reach more than 50,000 last year – 40% of the seven-seat MPV market.

Following this performance is no easy task, especially when rivals such as Toyota and Renault have raised the benchmark in the industry with stylish and innovative cars. Vauxhall claims that it hasn’t rested on its laurels with the new Zafira, taking the original design and refining it to bring “emotion and dynamism” to the class.

It’s certainly an improvement on the previous model, most noticeably in quality. The interior feels solid and durable and, although it may not be as tactile as some rivals, it certainly doesn’t feel cheap. The instrument cluster and centre controls are well laid out and the dash-mounted gearshift makes for a comfortable driving position.

Vauxhall has added some interesting details to the new Zafira such as the aircraft-style handbrake, which is designed to increase storage room in the centre floor console.

Storage and flexibility are the real considerations for MPV buyers and the new Zafira has plenty of both. Longer than its predecessor, it has more interior head and leg room throughout, while boot space is also increased.

Depending on specification, up to 30 different cubby holes are available, and if buyers opt for the innovative panoramic roof (four UV panels with automatically retractable blinds) they get five extra aircraft-style centrally roof-mounted storage compartments. The glass roof makes the cabin seem even larger while also giving the Zafira a mohican-style central ridge. Funky.

The Flex7 seating system, which has proved so popular, has been carried over without any major changes.

Five engines are available from launch with two more following later this year. The entry level is the 105bhp 1.6-litre petrol, joined by a 150bhp 2.2-litre direct and 200bhp 2.0-litre turbo unit. A performance busting 240bhp VXR 2.0-litre turbo will be launched in the autumn and a rather more sensible 140bhp 1.8-litre will also be added.

The diesel units are limited to two output versions (120bhp and 150bhp) of the impressive 1.9 CDTi engine, which will make up 50% of retail sales and approximately 60% in the fleet market. Zafira annual sales will match 2004’s 50,000 units.

There are five trim levels in all including the sporty SRi version, which features 17in alloys, sports suspension, aluminium pedals and tinted rear glass.

Based on the Astra estate platform, the Zafira is good fun to drive and handles well. It’s one of the closest car-like MPVs around and the driving position is spot on, while still giving the driver that raised view of the road.

On the motorway it’s very comfortable and quiet. Even when taken onto smaller, twisting roads it still retains its composure and can be thrown into bends without becoming unsettled. There is excellent feedback from the steering while the ride is smooth, absorbing bumps and potholes without any fuss. In fact, it’s sometimes easy to forget you’ve got all that MPV bit behind you.

There is also the option of IDS-plus, which includes continuous damping control, designed to adjust to different road conditions and minimize body roll. It works well. 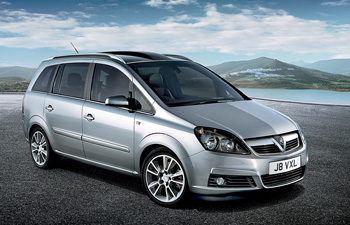