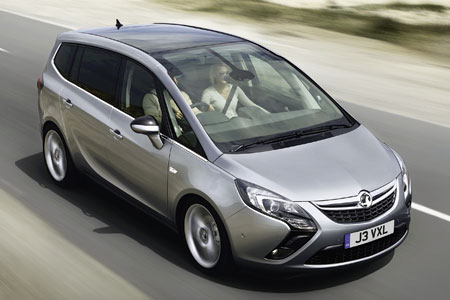 With the arrival of the Zafira Tourer, Vauxhall dealers will have two seven-seaters to sell.

Just as Citroën did with the original Picasso, the outgoing MkII model will stay on sale for the foreseeable future as a value offering.

Around 20,000 of those will have been sold by the end of this year, and a similar total is predicted for 2012, though split between the two siblings.

Historically, it’s been 60/40 in favour of fleet but that’s expected to be reversed within 12 months.

The Zafira Tourer is a world away from its predecessor on two counts. Firstly, an extra 190mm of length has created additional space for second and third row passengers, shifting it from C to C/D sector.

Secondly, the quality of the design inside and out is far more sophisticated.

The boomerang head-lamp design is a unique styling cue, there’s a genuine premium feel to the instruments and numerous standard and optional comfort and safety features are new to the model.

Never short on practicality and versatility, Vauxhall has managed to boost its appeal even further.

The already clever Flex7 system has been redesigned and the middle second row seat can now fold to create an arm rest for the two outer chairs.

It means the Tourer can be a seven-up family workhorse during the day, executive shuttle by night.

Also new is the optional FlexFix cycle carrier which slides out from the rear bumper to carry up to four bikes. Choose the highest two of the five trims and you also get the Meriva’s useful FlexConsole storage system between the two front seats.

It’s quiet, refined, spacious and very comfortable in all seven seats – in short, a genuine contender for best in class.