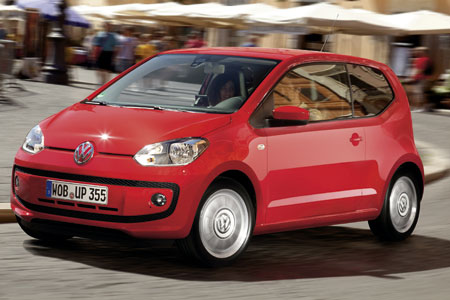 The successor to the pretty cool Lupo has been relatively anonymous, never quite offering the appeal of rivals such as the Ford Ka or Fiat 500.

The Up looks set to change that when it arrives in the spring as a three-door hatch, priced from £7,995.

Restyled versions will quickly join it from fellow group brands Seat and Skoda, and a five-door will be added later in the year, with a sporty GT and eco-friendly electric version both due in 2013.

So a full-on group assault on the UK’s A-segment is expected. Going by impressions from the press launch, when AM was encouraged to take the Up into battle on Rome’s congested city streets, Volkswagen has a dependable, spirited little soldier.

It’s nicely packaged, with a wheelbase optimised for space and comfort despite the car having overall dimensions smaller than a Ford Ka.

And while keeping the costs down is vital in this segment, it still boasts decent perceived quality and shows that a lot of consideration has been put into it.

The Slovakian-built car uses a new generation of 999cc, three-cylinder engines offering 59bhp or 74bhp, depending on the derivative.

It’s a revvy little unit which, like all three-cylinders, is accompanied by a fun soundtrack, and a nice five-speed gearbox.

It’s not rapid but is more than adequate for city use and remains fairly quiet at A-road speeds.

The entry model, badged Take Up, still looks good despite having just the basics anyone would expect of a Volkswagen costing under £8,000.

Air-con, remote central locking, electric front windows, height adjustable driver’s seat and split fold seats are among the additions included on the mid-range Move Up, and the High Up adds alloys, foglamps, heated front seats and mirrors, a few bits of chrome effect and leather trim and a choice of dashboard colour.

Dealers can upsell customers a variety of simple, low-cost option packs that will enhance particularly the lower-level derivatives, from a sensor pack with parking sensors, cruise control and multifunction computer to an assistance pack with city emergency braking below 18mph, stability control and a passenger airbag switch.

One particularly innovative feature, standard on High Up and optional on the others, is VW’s ‘Maps & More’ combined sat-nav and infotainment system.

It’s a device which organises navigation, Bluetooth phone, information and entertainment functions and can be removed and used independently of the car.

Apps developed for the Up will let owners tailor ‘Maps & More’ to their needs. The system will help boost its appeal to younger customers.

That’s a good thing, because cute as it is, Up will never fully leave Volkswagen’s sense of maturity behind.