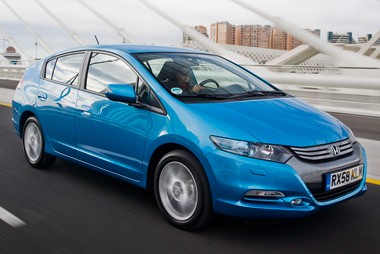 Most of the motor industry treated it as a joke when Honda launched a radical programme to promote the use of hybrid technology in its cars.

But 15 years on, the Japanese company looks to be well on the way to enjoying the last laugh with the introduction of its latest petrol-electric model.

Poised to deliver eco-friendly mobility to the masses, the Insight could be the right product to win valuable new customers for the brand – and it’s arriving at just the right time.

With UK Honda’s year sales likely to reach no more
than 82,500 by the end of March – dramatically down on the 106,000 units that were anticipated – the 60+mpg business and family car may well prove to be a turning point in Honda’s battle with Toyota for supremacy in the fast-developing market for super-clean transport.

Pricing is yet to be confirmed, but the revised target entry point of £15,000 – up £1,000 on the original forecast because of the shift in currency values and the increases in raw material costs – will allow Honda to keep its promise to make hybrid transport more affordable. It will also pitch the Insight at substantially less than Toyota’s top-selling Prius when it goes on sale in April.

Based on the Jazz platform, the five-door model also links the supermini’s engine with a smaller, lighter but 30% more powerful version of the electric motor used in the Civic hybrid.

With hatchback bodywork and 60-40 split-fold rear seats, it is the most versatile car of its kind yet from a company now poised to dramatically expand its hybrid offer with a sportscar next year and a Jazz version soon after.

Ten years on from the original Insight coupé, the new model will be available in three trim levels and is expected to achieve 8,000 registrations this year, 65% of them corporate.

Better-looking than the Civic hybrid, the Insight has adequate room for five and a more compact battery pack allows luggage space of 408 litres. Fold the rear seats and maximum load volume is 584 litres.

Honda’s gadgetry aimed at motivating drivers to make more efficient use of fuel may not be everyone’s cup of tea. It monitors driving styles and reflects economy performance with shades that change from green for good to blue for bad.

Another display has small trees ‘growing’ during gentle progress but a heavier right foot has them withering away. The multi-info unit can summarise drivers’ last three trips with wreathes and trophies or withering plants.

But the Insight does appeal with an easy driving manner to complement its sleek, attractive styling. Performance is adequate, even in eco mode, and progress is always quiet.

Longer but lower than the VW Golf, it is relatively large but has secure roadholding and nimble handling, despite slightly vague electric steering. Well finished and with more versatile bodywork, it offers better value than its Civic stablemate.