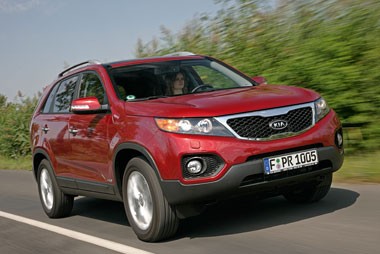 Only a few years back Kia was regarded as bargain basement. Then its Sorento arrived in 2002 and fought hard against the 4x4s of its day.

Now Kia is about to launch a new Sorento that is fit to resume the fight in the next decade.

The new model has a monocoque chassis and independent suspension, unlike the old Sorento’s body-on-frame old-tech construction, so a test drive will show Sorento is now vastly more nimble and car-like.

There are plenty more important points to new Sorento: it can be ordered in two-wheel drive to keep costs of purchase and ownership down; optional seven-seat versions will cater for extra kids; it has a five-star EuroNCAP safety rating; and CO2 emissions are as low as 171g/km with the new 2.2-litre diesel engine in a two-wheel drive derivative.

This engine is worth praise alone.

Producing 194bhp, 24bhp more than current Sorento’s 2.5-litre diesel, it has plenty of low-down torque for overtaking, manages almost 43mpg and is a class-leading unit.

It launches alongside a 2.4-litre 172bhp petrol engine, which is the poorer choice of the two, frankly. A diesel hybrid unit is in development.

But Sorento has moved from off-roader to soft-roader.

Electronic hill descent and traction control systems have replaced the old model’s low ratio gears and its towing capability has dropped from three tonnes to 2.5 tonnes.

Current Sorento owners with horse boxes or boats might migrate to a SsangYong or used Mitsubishi Shogun for their greater pulling power.

Nevertheless, the new model’s broader appeal will ensure it makes up for those customers.

KMUK has not yet decided the specification of UK models, but Sorento will be available in two grades.

Higher grade derivatives might have dual-zone climate control, auto lights and wipers and larger alloys, but details won’t be announced until early next year.

Four-wheel drive Sorentos, which are expected to account for around a third of sales, have an electronically controlled differential which diverts power to the rear wheels as needed, while the driver can lock the diff to ensure a 50/50 power split for low speed, low grip conditions.

There’s one more thing in Sorento’s favour: The Korean-built SUV will have a five-year warranty – equalled only by sister brand Hyundai’s Santa Fe.