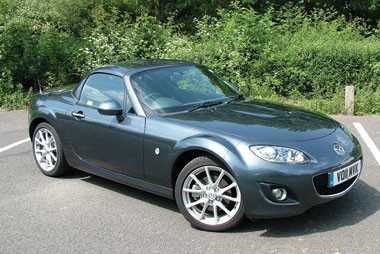 AM is always keen to gauge as wide a range of opinions as possible with its car road tests to ensure dealers get a holistic view as possible on what is being said about vehicles on or about to be on our roads.

So, our consumer views give a flavour of the influence played by our colleagues in consumer media land.

But the real picture can only really be gained from punters themselves and so from time-to-time I’ll take a look into an owners’ forum to see what is vexing drivers – a bit like David Attenborough exploring the ecosystem of a rainforest (only with less sex and death).

An issue that had puzzled me was the level of noise in the cabin when the roof is up, brought to mind by this time of year when the ‘lid’ is on all the time.

Wind and engine noise has been invasive, meaning nudges to the stereo volume, up when at higher speeds and down again when revs are lower.

The sound of the engine, when pushed, is one of the most enjoyable experiences of the car and allied to low centre of gravity and handling ability provide a heady mix and perhaps the strongest reason for choosing the car.

And the implications on comfort and noise levels of choosing the metal electric folding roof over a ‘rag top’ would be a prime consideration also.

Surely there would be no debate on which to buy if noise annoys?

And sure enough it is an issue that vexes MX-5 owners.

On the mx-5.com forum a user suggests he may revert from a metal top to a rag top convinced the noise levels would be reduced, due to the presence of a lining that reduced the “booming noise”.

Respondents suggest deadening pads (“cheaper than swapping the car”), absorbent material behind and under the seats (“a folded blanket as an experiment”) and the possibility wind noise is worse with the latest model than previous.

But, perhaps the most comforting comment is on comparative noise levels to other, auspicious models: “I’ve had a Lotus Elise with a soft top and a hard top and I’ve had a Mercedes SLK. The MX-5 sits firmly between the two.”

And another contributor berates anyone expecting a roadster to provide the same calm cabin environment as a BMW 7 Series when it is supposed to be light and an engaging drive.

A forum is almost never a place to go for consistent reasoning and logical debate, but it does give a fascinating insight into the driving lives of your current and future customers.