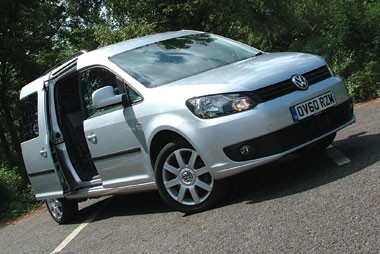 Do a search on Google for ‘Volkswagen MPV’ and the first three natural responses – including two links from VW’s own website – are for the Touran.

That came as a bit of a surprise to me, as I expected the longer-serving Sharan would be the bigger brand.

Browsers who scroll down the results might spot that the Sharan and Touran have a less glamorous, but extremely worthy seven-seater sibling, the Caddy Maxi Life.

Essentially an MPV version of Volkswagen’s small van, it doesn’t have the finer appearance and trinkets of its bespoke people- carrier siblings.

Yet it promises the capability for precisely the same basic job. It costs £19,445 and gives far more space than the similarly priced Touran.

AM has just taken on a Caddy Maxi Life for a long-term test, so over the next six months we will report on just how industrious and capable this low-key people mover can be.

Initial use has demonstrated how far the market has moved on. Look back a decade and most consumers would consider a 1.6-litre turbodiesel inadequate for a full-size MPV.

Yet the technology now built into the Caddy’s engine – a common-rail direct-injection fuel system and a variable geometry turbocharger – give it 184lb/ft of torque from 1,500rpm and 100bhp.

It has already proved its worth with four adults and two children on board – acceleration is swift enough to make joining fast-moving A-road traffic little concern.

Engine noise is more intrusive at motorway speeds than a Sharan, but this has to be expected as the engine is working relatively hard and this model has only a five-speed transmission (a seven-speed DSG auto is an option).

Perception of quality is good too, as this Caddy feels less van-based than its Nissan NV200 rival, which left rivet caps visible.

The materials used in the Caddy appear robust and of the quality expected of a Volkswagen vehicle.
In everyday use the Caddy Maxi Life still caters for up to 0.5 cubic metres of load behind the rear seats.

That easily equated to two large bags of garden rubbish sitting beneath the cargo cover.

In addition, small nets and hooks built into the roof frame allow for stowage of little items or bags.

One aspect to be explored in a future review is whether the Caddy’s rearmost two-person bench seat is less convenient than the NV200’s two foldaway individual seats.

Last year’s revisions to the Caddy range mean the bench is now removable for when a larger load area is required.

It’s unlikely to be as convenient as the fold-flat seats in most bespoke MPVs, but we’ll report soon on its practicality.