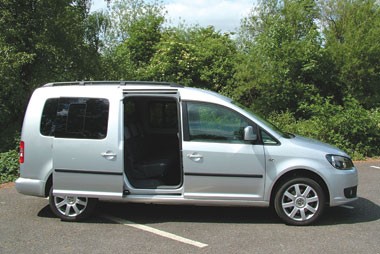 The Caddy Maxi Life’s capacity to be used as a load-carrying van and as a lifestyle vehicle has already been put to good use.

The van side of it shone through with a trip up to Manchester to help with a house move.

Even with the seats left in place there’s 4.2 cubic metres of boot space, while the loading height at the rear also made it easy to get heavier items in.

The drive across the hilly A628 Pennine route from Peterborough to Manchester was an enjoyable one, with the Caddy’s 1.6-litre diesel coping well with the extra load weight.

The Caddy has also been called into action for the UK’s music festival season, making the trip to Glastonbury, and it will be used as transport to the Big Chill Festival for carrying camping survival equipment.

It might even be made into a makeshift shelter if the weather turns torrential.

That’s a trick that has already come in handy, with the large rear boot door used as cover while wellies were being removed in a hurry in a downpour.

Visually, the new-generation Caddy has been refreshed with the latest front styling found across all new Volkswagens.

It’s still a van-derived car, so it can’t completely shake off its LCV looks, but from the front three-quarter angle it looks quite aggressive.

There are also new rear light clusters, plus roof rails available for the first time, and the option of cornering lights.

It’s a similar story inside with VW improving the quality of instruments and the steering wheel.

So that’s quite a lot of equipment and practicality for under £20,000.

The next challenge set for the Caddy will be an experiment to see how back breaking it is to remove all the seats.

That’s another plus point for the Caddy. If you’re buying a van-derived people carrier, the chances are you’re looking for that balance between load lugging and people moving.

Being able to get rid of all the seats means the Caddy strikes that balance perfectly.