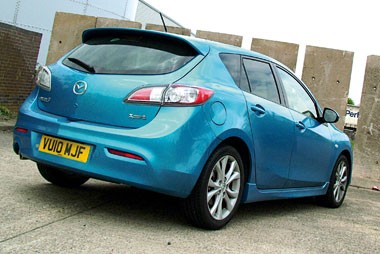 After an unfortunate parallel parking incident, AM’s Mazda3 has been into the bodyshop to be repaired.

The driver’s side rear light had been damaged courtesy of a bollard and some poor spatial awareness.

We’ve taken the Mazda3 to an approved Mazda bodyshop but it wasn’t a smooth process to get it there.

AM’s company insurer wanted to send the Mazda3 to its preferred repairer and it was only after a specific request, followed by a chat with a supervisor, that it was possible for it to be taken to a Mazda-approved bodyshop.

It’s a problem Mazda is addressing with its Call Mazda First accident aftercare service which puts work through its 177-strong approved bodyshop network.

We were quoted a three day turnaround for the light to be replaced and for a panel to be made right.

After asking, the garage loaned us a free Mini Cooper courtesy car while the repairs were carried out.

Other than having to chase twice for updates on how the work was progressing and to find out when to pick up the car, the repair process was smooth.

The work was carried out to a professional standard and the Mazda3 was given a thorough going over with a full valet inside and out.

The bodyshop even noticed that the screen wash was low and topped that up too.

Those added little extras had nothing to do with the repair itself, but they really influenced how I judged my experience.

I drove away from the bodyshop feeling positive with the effort that had been taken and was happy to tell colleagues the same.