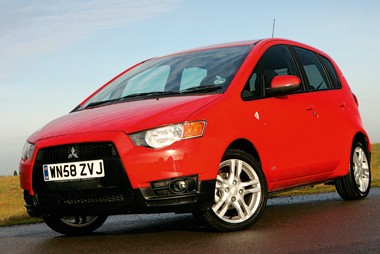 The supermini sector is difficult to compete in because there are so many decent choices out there, including the Ford Fiesta, Vauxhall Corsa and the Mazda2.

The Colt has a tough job on its hands to differentiate itself from the pack, but its new, aggressive front end – inherited from its Lancer big brother – helps. It’s more imposing as a result.
But it’s a shame the designers didn’t follow the idea at the rear, where things still tend towards cute.

Both three and five-door versions of the new Colt are 70mm longer than the outgoing model and, while it may look quite similar to the previous version apart from the front end, Mitsubishi says 65% of the parts are new.

The line up has been kept straightforward with three trim levels – CZ1, CZ2 and Ralliart – in both three and five-door versions.
Features include iPod/MP3 auxiliary plug, come-home lighting,emergency stop system (ESS) and a speed-sensitive stereo volume function.

AM tested the 1.3-litre CZ2 and it moves along swiftly and smoothly, but doesn’t quite match models like the Suzuki Swift.