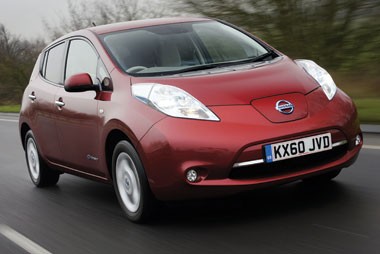 The UK version of the Leaf is now on the road and, while there are other electric vehicles (EVs) launching this year, Nissan’s new model has stolen headlines as the founding father of a new segment, much like the hybrid segment and the Toyota Prius.

While there are many similarities with other EVs in terms of the Leaf’s range and how long it takes to charge, where the Leaf really shines is how the technology is packaged and presented.

Drivers are greeted with a start chime akin to switching on a PC and the backlit digital information displays are far more impressive in comparison to other EV models.

Drivers can stay easily informed of how much charge is left via screens on the centre console and can see how their driving style affects the Leaf’s 110-mile range, as well as how much the use of things like air-conditioning or the radio drains the 48 lithium-ion batteries that power the 108bhp electric motor.

It’s easy to plan how far can be driven on a one way journey with a map of the UK and the area of the Leaf’s capable range if driven in normal mode or in Eco mode.

These features help to dispel any range anxiety felt when testing the car and other than the eerily silent start up and creep; driving a Leaf is not much different from driving a standard family hatchback.

EVs are extremely torquey due to the way they deliver their power.

This means the Leaf is surprisingly quick off the mark with 280nm of pulling power on tap as soon as the foot goes down.

Nissan reckons that’s the equivalent to the torque of a conventional 2.5-litre V6.

The Leaf is more than capable of accelerating to motorway cruising speeds of 80mph too, but drivers do so at their own risk as the range plummets, as expected, if the electric motor is driven harshly.

The steering is extremely light, which is fine for handling the majority of the Leaf’s journeys, but at faster speeds it’s not firm enough.

Squashy suspension means it can also get a bit bouncy on bumpy country roads. The Leaf will be built in Sunderland from 2013 and is due to receive some UK-specific tweaks which will make it an even stronger proposition.

Design throughout the rest of the car is clean and basic. The Leaf is solidly put together, but it would be nice to see darker plastics on the interior and more luxurious upholstery options.

Nissan has had to hike the price of the Leaf up from £28,990 to £30,990 before the Government subsidy due to sterling’s value against the Yen falling by 14% since prices were first announced last summer.

Nissan is also charging £995 for the installation of a home charging kit through a deal with British Gas and while this kit is optional, it’s essential if customers want to easily charge the Leaf at home.

Customers can take some comfort then that it only costs £25 in electricity a month to run the Leaf, which is £140 less than the average monthly fuel bill for a petrol or diesel car. It adds up to a saving of £1,680 a year.

Nissan’s 26 EV dealers have also had charging points installed at the cost of around £20,000 each for customers to use for free whenever they wish.